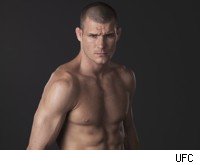 Based on the success of its first two Fan Expos in the United States and high hopes for its third next month, the UFC on Friday made official a Fan Expo in London for October.

The first two UFC Fan Expos were in Las Vegas at the Mandalay Bay Events Center. The first was held in conjunction with UFC 100 in July 2009. A second was held leading up to UFC 114 in May. And prior to UFC 118 in Boston next month, the UFC will hold its first fan event on the East Coast.

The London UFC Fan Expo will be Oct. 15-16 in advance of UFC 120: Bisping vs. Akiyama and will take place at Earls Court Exhibition Centre.

In a release from the promotion, UFC president Dana White said response from the European fans led to the company's first major fan event outside the United States.

"I am excited to bring a UFC Fan Expo to our incredible fans in Europe," White said in the release. "People have been asking me about an international expo ever since we held our first one at UFC 100, and now they have it – they're getting two days of the best fan experience in all of sports, and on top of that an incredible fight card featuring Michael Bisping vs. Akiyama."

At UFC 116 earlier this month, Marshall Zelaznik, the UFC's United Kingdom president and managing director of international development, told MMA Fighting's Ariel Helwani that he expects the London Fan Expo to be cut from the same cloth as its U.S. counterparts.

"It'll be just as big as any other fan expo – as big as the Boston one, for sure," Zelaznik said.

The first UFC Fan Expo drew an estimated 50,000 fans. But the second in May brought in an estimated 125,000 fans, White said at the UFC 114 post-fight press conference.

The expos feature appearances by fighters and MMA personalities for photo sessions and autograph signings, training seminars, vendors for MMA equipment and apparel companies and special fan Q&A sessions and keynote speeches from UFC brass like White and Lorenzo Fertitta. The UFC expects more than 100 vendors in the 20,000 square meter convention space.

Names of fighters expected to attend the London Fan Expo will be announced later.

The UFC has set up a dedicated Fan Expo site at ufcfanexpo.com for information on both the London event as well as next month's Boston event.