Bellator Attorney: Zuffa Lawsuit 'Will End Up Being Not Very Significant' 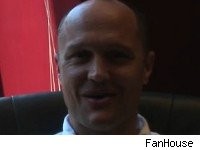 An attorney for the Bellator Fighting Championships is confident a lawsuit filed against the promotion and MMA agent Ken Pavia by Zuffa LLC will prove to be little cause for concern – ultimately.

As first reported by Yahoo! Sports' Kevin Iole on Thursday, Zuffa, parent company of the UFC and WEC, filed a suit against Bellator and Pavia, as well as unnamed co-defendants, in Clark County (Nev.) District Court claiming Pavia gave proprietary documents to Bellator on request from Bellator founder and CEO Bjorn Rebney.

The suit alleges Bellator and Pavia were conspiring to essentially steal trade secrets from Zuffa through the exchange of confidential documents in e-mails. Pavia, head of the MMA Agents representation firm, handles dozens of MMA fighters, including many under the Zuffa umbrella.

Speaking to MMA Fighting on Friday, Rebney said the promotion's attorney, Patrick English, had instructed him to not discuss the suit publicly. And Pavia, also reached Friday, said he, too, was unable to discuss the pending litigation.

But English said he believes if the two sides come together, Zuffa's concerns will be alleviated.

"I think that this will end up being not very significant," English said. "What happened, clearly, is the UFC got a hold of an intemperate e-mail that was sent and got concerned about whether legitimately confidential documents were being circulated. In point of fact, the documents are really not confidential – and nothing's been done with them in any case. I know the folks at the UFC very well. I have a call in to them, and I'm sure that when they're free they'll give me a call back, and we'll discuss it and tell them exactly what we've got – and I think that will allay their concerns."

English said the number of documents – and the nature of the documents themselves – isn't what he believes Zuffa is worried about. English said he wasn't sure how many documents were allegedly shared between Pavia and Rebney.

"Maybe five – I have them all," English said. "I didn't count them. And frankly, it looks to me as though they're multiples of the same thing. We're not talking about a massive number of documents or anything like that."

When asked if he knew how Zuffa came into possession of the e-mails, English was quick with his response.

"It's pretty obvious that somebody gave them to them," English said. "I think that's a question for Mr. Pavia, not for me."

Donald Campbell, of the Las Vegas lawfirm Campbell & Williams, which is representing Zuffa in the case, told MMA Fighting on Friday the heart of the suit was simple under the law: theft of proprietary information.

"(The suit) involves, at its essence, a theft, under the law, of information that is not entitled to be shared or used and abused," Campbell said. "We haven't invented the wheel here – these are well recognized causes of action, and that's why the courts have provided the significant remedies they have to address them."

Though Campbell would not put a dollar amount on the damages Zuffa is seeking, he said because of the "highly confidential" nature of the documents allegedly exchanged, Zuffa will "seek the highest extent of damages allowed."

"The conduct alleged is egregious, it's outrageous and we intend to address it with every legal vehicle at our disposal," Campbell said. "What's involved is the most sensitive and propietary information that has been essentially bought and sold on the marketplace in violation of multiple statutes."

"It doesn't appear that way from the e-mails, but I've got the stuff and I've looked at it," English said. "I will say this: I think that the UFC folks had a legitimate concern, but I don't think they'll have that concern after we talk. I wish a phone call had been made rather than a lawsuit."

Though the suit alleges Bellator, as a competitor, could use the documents in a way that is damaging to Zuffa, English reiterated that the documents are not confidential and were going to be used by Bellator as a way to make sure it was running its operation in a way that was consistent with other promotions.

"What Bellator was doing – although it doesn't appear that way from the e-mails – was making sure that they covered all their own bases by cross-referencing against forms that other entities were using," English said. "But the forms themselves are incredibly routine, and they're not proprietary in any way, and they're not confidential in any way. We're talking about things like a form that (says) that two (fighters) don't have the same color trunks (or) their form when they're cutting somebody."

Though Rebney could not comment on the suit, he did tell MMA Fighting he was busy working on the promotion's Season 3 debut, set for Aug. 12 in Hollywood, Fla. – and that he will watch UFC on Versus 2 on Sunday.

"What I can tell you is I'm a huge fan of the UFC," Rebney said. "I'll be watching the fights on Versus on Sunday. I'm a fan of the organization and I appreciate what they do."