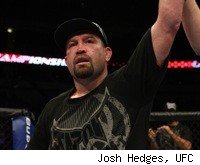 When Vladimir Matyushenko looks across the Octagon at Jon Jones on Sunday night, he'll see an opponent who's younger, bigger and faster. He'll see a fighter who's been all but officially anointed as the next big thing in the UFC light heavyweight division. He'll see a fighter who is essentially undefeated in a little over two years of competition, and one who is a 6-1 favorite with online oddsmakers.

None of this, of course, is news to Matyushenko. He knew what he was getting into when he accepted the fight, though the decision to do so wasn't automatic.

"I won't say I hesitated, but I thought about it for a few days and had a team meeting with my coaches and teammates," Matyushenko told MMA Fighting. "When it comes to a fight, if [UFC matchmaker] Joe Silva gives you something, that's the offer. I don't think it's right to try and pick fights, say, 'I want to fight this guy or just new guys.' No, to be in this sport you have to be willing to fight the best. That's what I'm here to do."

At 39 – 16 years older than Jones – Matyushenko is among the elder statesmen of MMA. He had his first fight in 1997, back when the sport was still populated by many fighters with more enthusiasm than skill. He went on to fight for the UFC light heavyweight title in 2001, losing a decision to Tito Ortiz, and several years later became the IFL 205-pound champ after going undefeated in the organization.

Now the Belarussian who defected to the U.S. while visiting for a national wrestling meet in 1993 finds himself much closer to the end of his fighting career than the beginning. Nine or ten years ago, Matyushenko admits, he thought he'd be done by now.

Instead he finds himself in the main event against a young prospect who seems to be just getting started.

But the way Matyushenko sees it, 'experienced' isn't just a kinder synonym for 'old.' It's a real asset, and one he plans to put to good use in this fight.

"The biggest thing is that when you are experienced, you can get kicked in the leg or hit in the face and you don't go back to your wrestling and forget about your game plan. You just keep doing what you came to do. That's an ability that comes with experience," he said. "My experience helps me not just in the fight, but preparing for the fight, choosing the right trainers and the right approach. When I was younger, I would just go bang all the time. Now I'm much more careful, trying to prevent injuries."

The upside for Mayushenko, who is 2-0 since returning to the UFC in 2009, is that the fight with Jones is a chance to prove that he's ready for one last title run. He may not have time to work his way back up to the top of the crowded light heavyweight division if he loses, and he knows it.

But if he wins, if he becomes the grizzled underdog who topples the rising star, suddenly all the younger fans who weren't around for his glory days of a decade ago will stand up and take notice. So will the UFC.

"I think both of us can gain a lot from the fight. I have to prove that I'm still capable of fighting at this level, and he has to prove that he's young but ready to fight for a championship. We're both coming at it from two different directions," said Matyushenko. "But I'm definitely trying [to be champ]. If you're going to do something, you might as well do it all the way."