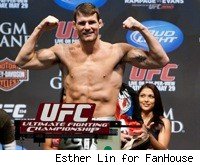 The UFC's return to London on Oct. 16 will be televised on Spike TV on a same-day, tape-delay basis and is slated to feature at least five bouts, the basic cable network announced Thursday morning.

The UFC has assembled its who's who of top British fighters for this UFC 120 event at the O2 Arena. The Ultimate Fighter 3 winner Michael Bisping, former No. 1 welterweight contender Dan Hardy, rising star John Hathaway and The Ultimate Fighter 9 winner James Wilks are all competing on the main card.

The bouts to air are Bisping vs. Yoshihiro Akiyama, Hardy vs. Carlos Condit, Hathaway vs. Mike Pyle, Wilks vs. Claude Patrick and Cheick Kongo vs. Travis Browne. The Spike TV telecast will begin at 9:00 PM ET with Wilks vs. Patrick and closes with the Bisping vs. Akiyama main event.

The last time the UFC gave away a numbered UFC event was also in England, for UFC 105 last November, which featured a main event between Randy Couture and Brandon Vera.