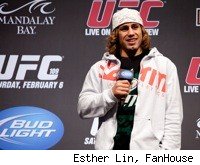 Just seven months after its official launch and less than a year in operation, Form Athletics has been acquired by sneaker giant K-Swiss.

Form Athletics is an athletic apparel company based in Laguna Beach, Calif. co-founded by former WEC featherweight champion Urijah Faber and is most visible in the MMA scene through Faber's involvement with the brand.

The other man behind Form and the brainchild of the company is Mark Miller, a former DC Shoes Senior Vice President and founder of the M3 snowboard line, who felt he could tap the MMA market with his experience in the extreme sports industry.

Form will continue to operate as a division under the publicly traded K-Swiss. Previously the CEO, Miller remains on board as president and will also head K-Swiss's new Orange County division with a focus towards youth consumers.

Faber last fought in the main event of WEC's first pay-per-view in April, losing to champion Jose Aldo by unanimous decision after five rounds. After the lopsided loss, Faber decided to move down to bantamweight and was scheduled to face Takeya Mizugaki at WEC 50 in August until an injury forced him off the card.