James Toney: I'll Hit Randy Couture So Hard His Grandparents Will Feel It 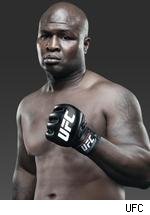 As James Toney talks up his UFC 118 fight with Randy Couture, he makes so many outlandish, over-the-top comments that you're never sure how much of it he actually believes and can back up in the Octagon, how much is a delusional overestimation of his own boxing skill and underestimation of Couture's MMA skill, and how much is pure hype that he doesn't believe for a minute.

But whatever the case, it's always entertaining.

In a live chat with MMAFighting.com, Toney belittled the punching prowess of MMA fighters in general and Couture's striking in particular, and he said that while he admires Couture for having the, um, guts to fight him, he doesn't think anyone in MMA can touch him standing up.

"He's got the balls to fight me but there's no MMA fighter who has the balls to trade punches with me," Toney said of Couture. "If they do it's suicide."

Toney fielded several questions from readers who pointed out that Couture's wrestling background should make it easy for him to dominate Toney in the clinch and on the ground, but Toney was having none of it.

"If Randy tries to grab me I'll hit him so hard his grandparents will feel it," Toney said. "I keep reminding everybody, the fight starts standing up. To shoot you have to get close and when you do, you're going to get hurt."

And hurting Couture is exactly what Toney says he wants to do.

"I'm in the business of hurting people," Toney said, "and that's what I'm planning on doing."