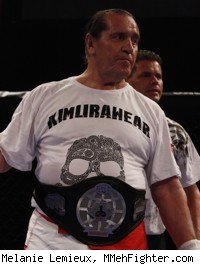 The first thing John Williams wants you to know about his record-breaking MMA fight this past weekend is, it wasn't a gimmick. It wasn't a novelty act, some cheap ploy to sell tickets or attract headlines.

Well, maybe attracting the headlines was important, but for a good reason.

The 70-year-old from New Brunswick, Canada became the oldest person to ever compete in a professional MMA bout when he took on 49-year-old former pro wrestler Larry Brubaker on July 24 in Moncton. On paper it sounds like a carnival act, but the fight was serious business, Williams said, done to prove a serious point.

"I was trying to bring attention to the fact that when a person becomes a senior, society kind of pushes them out of the loop. The attitude toward them is that they're dumb, they can't do anything, physically they're just vegetables, and they're sort of shunned by society," Williams told MMA Fighting. "I wanted to find a way to show that life isn't over at 55 or 60 years old. You're not useless or obsolete. We live in a use-oriented society, and you get told that enough that even you start to believe you're useless."

As someone who prides himself on being a man of action -- if you want to hear about his many athletic exploits, just ask, but you might want to put on a pot of coffee first -- useless is the one thing Williams couldn't stand to be. Certainly, he's not the only one to ever feel this way. He's just the only one to combat that feeling by getting into a cage and fighting another human being.

But this wasn't simply an idea that popped into Williams' head after watching too much cable TV. He didn't do this on a whim. It was a quest five years in the making, and one that hit several roadblocks along the way.

First, there was the issue of licensing. Even back when Williams was a young man of 65, the local athletic commission wasn't exactly eager to let him fight. Even though he'd been competing in one form of martial arts or another since he was seven years old, and even though he'd kept up with the sport during seminars with Royce Gracie and Georges St. Pierre, all the commission officials saw when they looked at him was a liability.

More on MMehFighter.com: More Williams Photos, Recap of Event
Williams submitted to every medical test he could think of in order to prove his fitness and physical readiness. He took numerous blood tests, wore a heart monitor for 24 hours straight, did extensive tests on treadmills. His blood pressure was spot on. His resting heart rate would have made a distance runner jealous. Still, no one wanted to put a senior citizen into the cage, so Williams had to try another route.

"I went and got information on discrimination towards a person because of age, and I realized that if I say this is my job and I'm physically capable of doing the job, there was no way in the world they could stop me," he said. "This had nothing to do with risk factors. When you know what you're doing, MMA is safe. I could have done an amateur thing or an exhibition, but no, I wanted to do a real fight."

His discrimination approach worked. The commission realized they were fighting a losing battle, he said, and they relented. There was one obstacle out of the way. The next problem was finding someone willing to fight him.

"Nobody wanted to take me on because it's a no-win situation for them," Williams said. "If they win, people will say all they did was beat an old man, and if they lose it's embarrassing for them."

Just when his prospects for finding an opponent were looking hopeless, a candidate revealed himself the old-fashioned way. 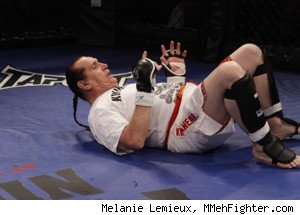 "It was a strange thing. I went and bought a car – [Brubaker] owned a car lot – and we had a disagreement over one of the car payments and I've got a kind of short temper and so does he, so we almost got into a scuffle right there in the parking lot. My son had a car from him as well, and when my son saw him the guy said, 'Your dad thinks he's pretty tough [expletive]. I heard he wants to get someone to fight him in the cage, so why doesn't he fight me and we'll settle our differences there?'"

This, as it turned out, was all it took to get two fighters with a combined age of 119 years (another world record) in the cage together. Well, that and a few extra meals. Brubaker was considerably heavier, so Williams put on about twenty pounds to barely squeak into the heavyweight class. He's still a little upset about it, because he's sure it hurt his quickness and cardio -- a regrettable, but necessary consequence in this case.

The fight itself was a bit of a blur for Williams. He remembers opening up Brubaker's face in the first round with a series of backfists. He remembers Brubaker tagging him with a kick to the body when the two touched gloves to start the second (what Williams describes as "a desperation move"). He remembers transitioning from an ankle lock to a twisting knee lock, and back to an ankle lock for the submission finish in round two.

Mostly, however, what he remembers is how it made him feel to get in the cage and mix it up.

"The point of life is living it. And I tell you, I got in that cage and I felt alive. I felt human again. You get that thing over your head, people think you're 70 and you don't know [expletive]. They don't bother to get to know you. I like Eminem. I like rap music. ...Mentally, I feel the same as I did when I was 30. I like the same kind of cars and the same kinds of women. Nothing's changed for me, but there's this stereotype. You don't change, but they try and make you fit a mold and be something you don't want to be, which is an old person. Not me. I've been a fighter all my life."
You only live one time and then you're gone forever. If you're remembered by people for something, then it's like you're immortal.
-- John Williams
This isn't Williams' first world record. He set one in the 1970's for doing 13 straight hours of judo throws, he said, then another for breaking an eleven-inch chunk of ice with a single blow, which he did to bring awareness to treaty disputes that his Native American brethren were having with the government.

But at the same time, he can admit that setting this particular record was as much for himself as it was for the other seniors he was trying to inspire. Yes, he wanted to get people up and get them moving, but he had selfish reasons too. Time is running out now, and Williams knows it. It feels like it's going much too fast and there's nothing he can do to stop it.