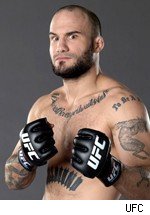 Chicagoan Mark Miller and Josh Shockley, of nearby Northwest Indiana, will meet on the local preliminary card of Bellator 25 on Aug. 19.

A Bellator official confirmed the bout to MMA Fighting on Wednesday, as did Shockley – who was scheduled to make his debut with the promotion at Bellator 14 in April, but had to pull out with a shoulder injury.

Miller (10-6) is a veteran of the International Fight League, where he had two notable wins over future UFC fighter Brad Blackburn and UFC vet Josh Neer. He also was on Season 9 of "The Ultimate Fighter," beating his then-training partner Kevin Knabjian to get into the house. But he lost his quarterfinal fight on the show to Nick Osipczak.

He made his lightweight debut last month at Hoosier Fight Club 4 in Gary, Ind., winning a unanimous decision over Charles Wilson. That win snapped a four-fight losing streak, including setbacks to Jay Hieron and Mike Pierce.

Shockley (6-0-1) said Wednesday his original opponent for Bellator 25 was to be St. Louis-based lightweight Mike Corey, but he pulled out of the bout a month ago.

"They bounced around a few names, then offered me Miller within a week," Shockley said. "I happily agreed to fight him knowing a win in this fight could be huge for me."

Shockley, who fights out of the Duneland Vale Tudo camp in Valparaiso, Ind., that has produced current UFC newcomer Darren Elkins, said his spring injury was a result of a training mishap with Elkins.

"The injury I had was a sternal clavicular dislocation. I pretty much dislocated where my collarbone meets my chest plate," Shockley said. "The doctor at the ER said in 15 years, he has only seen two other cases of it – and they were both in babies. Darren Elkins and I were grappling, he hit a takedown and I just landed awkward."

Elkins fights Charles Oliveira on Sunday at UFC on Versus 2 and, ironically, won his UFC debut against Duane Ludwig at UFC on Versus 1 when a takedown buckled Ludwig's ankle severely enough to warrant a TKO.

Now healed, Shockley said he won't be bothered with talk of ring rust, even though Miller will be his first fight in nearly a year. All but one of his six wins have come in Indiana. The biggest victory on his resume came in February 2009 against M-1 veteran Vener Galiev in St. Petersburg, Russia. Shockley won with a first-round armbar.