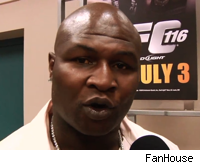 When boxing champion James Toney first signed with the UFC, he didn't see any reason he shouldn't get a heavyweight title shot. And so, Toney says, he asked for Brock Lesnar as his first opponent inside the Octagon.

But the UFC had other ideas.

According to Toney, when the UFC told him he wasn't just going to waltz right in and fight the heavyweight champ, that set off an interesting negotiation with the promotion, which floated the idea of having him fight Kimbo Slice before settling on Randy Couture as his first UFC opponent.

"The person I wanted to fight right off the bat was Brock Lesnar," Toney said in a live chat with MMAFighting.com. "He's a champion, I'm a champion and I wanted to do it. But they said I couldn't do that. Then they said, 'How about Kimbo?' But I said, 'That's too easy. That's like kicking a little kid's butt.' But then Randy started saying he wanted to fight me, so I said, 'OK, you're the first one getting it.'"

Obviously, no one with zero MMA fights on his record is going to get the heavyweight champion of the world in his first fight, but Toney says he's completely serious about wanting to fight for the UFC heavyweight championship, and that he's let UFC President Dana White know how he feels.

"I told Dana my goal is to hold the heavyweight championship of the UFC and in boxing at the same time," Toney said. "So as long as it takes me to get Brock Lesnar, that's how long it'll be. If Lesnar gets by Cain Velasquez, I'll fight Lesnar in February or March. ... Lesnar ran away from Shane Carwin like a girl, but then Carwin ran out of gas and quit. But I'll fight any of them, any time anywhere. That's my motto."