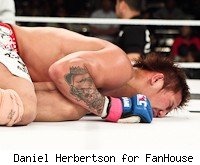 Shigeki Osawa and Katsuya Toida's bout at Sengoku Raiden Championship 13 held on June 20 was officially changed on Wednesday from a DQ win for Osawa to a no contest.

Toida protested his disqualification with the Sengoku commission and after getting the fighter's and official's statements and reviewing footage it was too difficult to decisively determine whether the fight-ending knee was illegal or legal and so the bout was ruled a no contest. Osawa took two clear low blows in the second round which seemed to cripple the wrestler but the final match-ending blow in the third round was certainly questionable.

A rematch is planned for SRC 14 which is to be held on Aug. 22 but no bout agreement has been signed yet.