For Brian Stann, Life Is About More Than Just Victories in the Cage 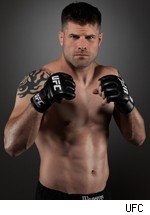 In one form or another, Brian Stann has always been fighting.

Those who compete in mixed martial arts, like the UFC's Stann, often talk about the rigors of training and the other level a fighter's mind and body have to climb to in order to be successful in the sport. For Stann, stepping inside the cage, as he'll do Sunday against Mike Massenzio in San Diego, is a walk in the park compared to what he's been through.

As a platoon leader in the Marine Corps in 2005, Stann's unit came under heavy attack during Operation Matador in Iraq. For six days, Stann led his team of 42 Marines through counterattacks in the ambush. All 42 survived, and Stann's leadership earned him the Silver Star, accolades from President George W. Bush, television appearances on MTV and the History Channel, high-level stories in major newspapers and magazines – even book offers.

Worrying about someone standing across from him trying to punch him always gets brought back to perspective compared to his time in the Corps, particularly those six days in Karabilah. Could any experience in an MMA fight compare to that?

"Never," Stann told MMA Fighting last week. "Not unless the UFC starts allowing (improvised explosive devices) to be somewhere in the canvas and snipers to be up in the stands shooting at me when I'm fighting."

Stann knew early on he was going to wind up serving in the military, and being born on an Air Force base in Japan seems an appropriate precursor for the path his life would take. A star football player at Scranton Prep in Pennsylvania, Stann was heavily recruited for college ball – including an offer from the Naval Academy. When that offer came, Stann knew that was where he needed to be. It also set off a string of events in Stann's life in which he's had the foresight to steer that path the direction that would work best for him.
I like being in environments where other people take things very seriously.
-- Brian Stann
"I think it was my personality that just drove me toward the military," said Stann, whose nickname, naturally, is "All American." "In high school, I noticed that I had a different kind of personality and I thought I would get along better and find more people like me at a place like the Naval Academy. And when I was at the Naval Academy, I thought the Marine Corps would be a better fit for a person like me, as well. And it worked out – it was true. Now, being a fighter, I think my personality is in an environment where it's more welcomed, as well. I take things very seriously. I think plenty of people know that about me. I like being in environments where other people take things very seriously."

"I think the biggest thing about my experience at the Naval Academy, and really more so in the Marine Corps, was training to be a leader and then being a leader making decisions that impacted men's and women's lives – literally," Stann said, thinking back especially on his command during Operation Matador. "You had to make life-and-death decisions. And when you've been through that, a fight just doesn't seem that cataclysmic."

Stann's success in mixed martial arts came early. After making calls from Iraq to promoters in the States trying to set up fights for his return, he got a shot for Matt Lindland's SportFight promotion in Portland. A first-round knockout later, he was signed to the WEC. And four straight first-round knockouts after that, he was adding a fifth to his resume with a win over Doug Marshall to win the WEC's light heavyweight title.

WEC co-founder and general manager Reed Harris, whose own son served in Afghanistan, said Stann is the type of fighter – and person – Zuffa wants under its UFC and WEC banners.

"Brian Stann is one of the finest individuals I have ever had the pleasure of meeting and, even better, working with," Harris said. "When I met him prior to his first fight in the WEC, I knew immediately that he was not only a great fighter, but more importantly, a great person. Many people talk about their dedication to our country, but few risk everything to serve and protect our freedom. Brian not only did that, but excelled at a level that few do. I knew he would be a great addition to our company and I truly felt honored just to be in the same room with him – he's that kind of person."

Stann had what it took to win a title, though he lost it to Steve Cantwell in his first defense just before the UFC absorbed the heavier weight classes from the WEC in 2008. But even he admits that starting his career with six straight knockouts, while a nice stat, meant very little after the loss to Cantwell. 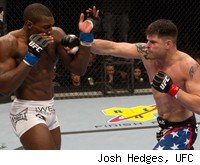 "I had a very limited amount of knowledge in the sport," Stann said about a time when he only knew how to stand and trade, just three and four short years ago. "No real training. So when you're really comfortable with what you know, you can fight at 100 miles an hour. Over the last two years, I've been flooded with knowledge and I think it's slowed me down a little bit because you're thinking a little bit more: 'Oh, wait – I learned how to defend this position.' 'Oh, wait – I learned how to counter this.' I've really become comfortable with my skill sets. I've got two years of real solid training under my belt, and I can fight at a much faster level at this point where I'm not thinking as much and I can just let things happen. I'm not worried about Massenzio taking me down because if he does, I'm actually good off my back now."

In February, in a loss to Phil Davis at UFC 109, being good on his back wasn't the case. Davis, an All-American wrestler, took Stann down with little difficulty each round and kept him on his back the majority of the fight on his way to a dominant decision victory. Always small for a light heavyweight, Stann made the decision to drop to 185 pounds, where he will make his middleweight debut on Sunday.

But he also went right back to work with Greg Jackson and Mike Winkeljohn at Jackson's MMA in Albuquerque, N.M., to prepare for the wrestlers that he said could gameplan to "take me down, lay on me and hold me down."

"I made a lot (of adjustments)," Stann said. "I took four days off after that Phil Davis fight, and then I threw a gi on and I trained for 4 1/2 months straight – gi jiu-jitsu in the morning and wrestling at night. I wrestled with a guy named Harry Lester, who's an Olympian, and just really got in there with some really, really good wrestling and just fine-tuning some of my takedown defense, seeing what sticks with my style."

He hopes what sticks is a return to finishing fights – he's 2-1 in his last three bouts, all decisions. On Sunday in San Diego, on the preliminary card for UFC on Versus 2, Stann gets another top-shelf wrestler in Massenzio, who hasn't fought in nearly 19 months. But like lessons learned on battlefields, Stann knows he can't always control what happens in front of him. Instead, he has to prepare himself to best respond to it.

"I always want to finish fights," he said. "But it's tough when you get guys, like my fight last December (against) Rodney Wallace, and all he did was dive at my legs – it's tough to try and finish like that because they don't give you an opportunity to hit them. But I certainly want to finish this fight."

And Stann believes if Massenzio stays standing, it will be his downfall.

"I always want to keep it standing. That's what the fans like to see, and that's what I love to do," Stann said. "If I can get Massenzio to try and show off his boxing skills against me, then I can make him unconscious. But he's a wrestler. He's going to do his thing, and I'm going to do my thing – I'm a striker. Early on, he's going to be shooting a lot. He's going to try to turn it into a wrestling match and he's going to have to be in really amazing condition to be able to continue that gameplan throughout the fight."
If you're in this and your ultimate goal is not to be champion some day, then you're in a tough spot.
-- Brian Stann
Where Stann is perhaps best equipped when it comes to the fight game is inside his head. He said the training he endures with Jackson's camp is similar to training in the Marine Corps – mind, as well as body.

"You do some physical training that is so difficult that it tests your mind," Stann said. "And at some point during that physical training, your mind is going to tell you that you need to stop. Your body can't take anymore. You need to quit. And we train a lot out here to train ourselves to tell our minds, 'Shut up.' And Greg really focuses on that, and the Marine Corps does an awful lot of training like that. That certainly helped prepare me."

It no doubt also keeps him geared up for endeavors like his autobiography, "Heart for the Fight," which will be released in September as a collection of his stories wearing not just fight shorts and gloves, but utility uniforms and dress blues. And it gears him up for a fight he talks about with as much conviction as anything else – his charity, Hire Heroes USA, which aims to help veterans trying to enter the workforce have more success at landing jobs. Stann said the unemployment rate among returning veterans is more than double the national average.

"I don't just participate in the charity, I run it," Stann said. "It's my No. 1 priority in life, and that's my way of staying connected and staying in the fight for these guys, because for these guys to be on the front lines and to come home and not have a shot at the American dream is a travesty."

Inside the Octagon, Stann (8-3, 2-2 UFC) wants to build another winning streak and get back to the point where he can have another belt around his waist. That journey starts Sunday against Massenzio.

But Stann said that if he's doing it right, that journey will reap for him more benefits than just what he hopes is another shot at a title one day.

"If you're in this and your ultimate goal is not to be champion some day, then you're in a tough spot," Stann said. "My ultimate goal is to be champion and besides that, every fight you learn a little more about yourself. I want to make sure that every fight, I learn more and I grow more as a husband and father and take from martial arts what I should be taking from it as far as values and lessons learned."

It doesn't get much more All-American than that.