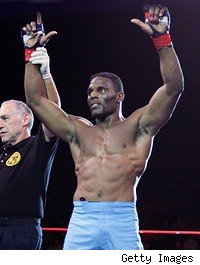 Recently the Maximum Fighting Championship organization sent out a press release with a quote from lightweight champ and MMA vet Antonio McKee, who vowed to retire if his upcoming fight with Luciano Azevedo on Sept. 10 goes to a decision. This raised some eyebrows around the MMA world, because if there's one thing McKee (24-3-2) is known for aside from his dominating wrestling-based style, it's winning decisions.

McKee likes to point out that he hasn't lost since his 2003 defeat via decision against Karo Parisyan, but during the unbeaten streak that consisted of thirteen wins and one draw, all but two of those fights went to the judges' scorecards.

With that kind of track record, is the 40-year-old McKee really willing to wager his career on his ability to finish the very tough Azevedo, or is this all a publicity stunt? To find out, I sat down for a conversation with the always outspoken lightweight.

How serious are you about this promise to retire if you go to a decision against Azevedo?

This is what I said. I said, if this fight goes to a decision and it's a boring decision, I retire. If this fight is not the fight of the night, I retire. Basically, if I don't go out there and put on a show, just destroy and annihilate this guy, then I'm done. If it's one of those matches where I take him down, ground and pound, holding him there, I retire. I'm done. Because it's obvious that I'm the best at what I do since I haven't been beaten in eight years and no one's come close to stopping me. So I'm not what the fans want to see because of my abilities to do what I do.

I don't have to stand up and get hit in the face. No one can stop me from taking them down and no one can hit me when we're standing. What the fans want to see are the knockouts, the blood, the gory stuff. They want to see that, and I'm not about that. At my age, 40 years old in the lightweight division, it's phenomenal that I'm even able to do it at all, let alone go undefeated for the last seven, eight years. I'd rather just walk away knowing I was the best at what I did and no one could stop that.

Why now? You've had this same fighting style for a long time and you caught a lot of flack for it. Why change now?

I was waiting for the sport to evolve. I think it's amazing that I go out there every freaking fight, you know what's going to happen, and no one can stop it. It would be one thing if I was just going out there holding guys, but if you look at the tape you'll see that they're holding me because I'm trying to knock their lights out. I don't know how people say I'm just laying on people when all my opponents end up bleeding and needing stitches.

You see guys after the fight, needing stitches all over their face. Derrick Noble, he needed stitches across his eye. I walk out of the fights untouched. It's f---ing amazing! How the hell does this guy do this? Somebody kick his a--. Somebody stop his takedowns. Somebody submit him! But I'm the best at what I do. I already know that. You see all these guys doing the same thing now, and I'm better than all those guys who think they can do that. Sean Sherk, what does he do? He throws that sloppy overhand right with a blast double-leg. Matt Hughes, what does he do? Georges St. Pierre, he doesn't even get hit anymore. And afterwards, he says, 'I'm not a brawler; I'm a mixed martial artist.' And then you have people talking about how great he is.

I do exactly what you saw him do, but better! I think a lot of it is racist. And I'm not saying racist against all black people necessarily, but racist towards me. You have these white guys who do the same exact thing, why doesn't anyone say this stuff about them?

You do hear that same criticism of some white fighters, though. Look at Jon Fitch.

But he's still fighting in the UFC, still making big dollars. And, the big difference is, he's not undefeated for eight years. I'm saying find someone to kick my a--, shut me up, and I'll retire.

How much of the decision to make this proclamation about retiring is based on the UFC not being interested in giving you a shot, even with your winning streak?

Actually, the UFC is interested. You know what I know, it's not just about how good you are. There's a lot of other factors involved. I probably shouldn't say this because it might come back to bite me, but you remember when they brought back the 155 [pound] division. The guy that had stood with them the longest there was Yves Edwards. He lost one fight, got triangled, then had a stoppage due to a cut against Joe Stevenson and they cut him. What? You got white guys who have been knocked out three or four times and keep coming back. Chuck [Liddell] has been knocked out so many times they need to make a stone with his name on it. Now, if anyone should have gotten a shot at the title, it should have been Yves Edwards. But it wasn't.

And you're saying that was based on race?

Why are they handpicking the minorities? Is it because you've got all these white guys, Harley-Davidson, Jack Daniels type people out there buying all the expensive tickets? Because I can understand that, but at least come out and say it. Don't tell me you got the best in there, because that's bulls---.

But what about guys like Jon Jones or Phil Davis?

Do you think that the reason many fans don't like to watch you fight is because of race?

No, not at all. I feel that way, but I don't think that way. The reason I feel that way is because I don't do anything different than Sean Sherk, Matt Hughes, St. Pierre. I do nothing different from them, except I do it better than them. Why did they let Yves Edwards go? He was a stand-up banger. Why didn't he get a rematch against Joe Stevenson? He got cut, but he was ahead on the scorecards. I understand. It's a business. It's not about who's the best.

But fighting style has to have something to do with it as well, right?

I've been working my hands a lot for the past three years. People in my gym say, 'McKee, you've got great hands, why don't you use them in a fight?' I say, 'Why should I if you can't stop me from taking you down? Why should I stand with a guy and risk getting knocked out if I don't have to?' And they say, 'Yeah, that's a good point.' What, you go out there and get your face all busted, teeth knocked out and nose broken for three grand? For five and five? Get out of here.

It seems like you have a lot of anger towards MMA.

Now I'm bored. I've beaten all the guys who were supposed to beat me. I've never been dominated by anyone I train with. I've tossed around Tito [Ortiz] and "Rampage" [Jackson], Randy Couture, Mirko "Cro Cop" [Filipovic], Dan Henderson, and they'll all tell you that McKee's bad-ass. But that doesn't get me paid. Look at Dan Henderson. I knew him in college. He was a good-looking guy, star wrestler, got all the chicks, now he can barely talk. For what price? His jaw's been broke, his nose is all busted, he's slow as hell now. I'm sorry, I'm not in the sport for that.

But since it's the fans who are paying the money that pays the fighter salaries, don't they get to decided what styles are rewarded and what styles aren't? It's their money driving the sport, isn't it?

You know what, it's not the fans I'm having the issue with on the internet or on the talk shows. It's the fighters who could never be as good as me at what I do. For example, Bas Rutten. I told Bas Rutten straight out, I've got a grand right now for you on HDNet that I'll kick your a--. Stop my takedown. Let me see it.

I told Guy Mezger the same thing. You're saying all this stuff about me, what about your boy that had the worst fight of the night and you don't say one thing bad about it? But you ridicule me the whole fight instead of building me? If you see a guy who's 40 years old, ripped up, in great shape beating up on all these 25-year-old guys, whether you like me or not, shouldn't you be building up that guy who's the lightweight champion? You're there to do a job, which is to commentate and educate people on the fight, not talk s--t on the champion.

Do you feel like you could walk away right now with no regrets?

Honestly, I'm not in it anymore for my own personal gain, which was for me the ego of being the best fighter in the world. This is different. This is a new sport. This is a new animal, and it's so new most people don't know to tame it. They want just the raw nature of fighting, and I'm a little more methodical than that.

So now, let me go put on a show, talk s--t, throw head kicks, flying knees, pick people up and slam them. Now, I'm going to go out there and have fun. I already know I can win. Before it was a business to me. It was a job. If I wanted to be an entertainer, I would have gone into entertainment. I appreciate the fans, because without them we would have a sport. But I looked at it as my job.