'Such Great Heights' a Must-See for Jon Fitch, MMA Fans 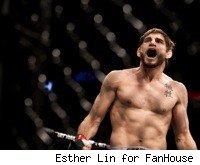 With that in mind, I was excited when I heard that a group of young filmmakers -- Jonah Tulis, Philip Frank and Jesse Osher -- had produced a documentary on Jon Fitch, which was shot during his UFC 87 welterweight title run of a couple years ago, as well as a deeper look into what makes American Kickboxing Academy one of the most respected MMA gyms in the world.

It's safe to say that other than The Smashing Machine and perhaps one or two others, the MMA documentary scene has been pretty subpar. So when the filmmakers invited myself and a group of other MMA media members to watch a special sneak preview of Such Great Heights prior to UFC 107 in Memphis, TN, I jumped at the opportunity.

Such Great Heights does a fine job of capturing the roller coaster ride of emotions leading up to a fighter's first major title shot. And Fitch proves to be a great subject, as he comes across as a humble, focused and hard-working fighter, who has been waiting his entire fighting life for a shot at the champion.

Full disclosure: I consider Fitch to be the second-best welterweight in the world right now (behind Georges St-Pierre, of course) and one of the best pound-for-pound fighters in MMA. He hasn't finished an opponent since 2007, and that has led to a lot of fans, in my opinion, forgetting about the fact that he has beaten some of the best fighters in MMA en route to amassing a record of 22-3.

So it was interesting, at least to me, to learn more about Fitch the fighter, the soon-to-be husband and the budding comedian, while stepping into his mind as he prepares for the biggest fight of his career. So captivating was the footage shot in the moments before his fight against GSP that I found myself lost in the film, completely forgetting the outcome. And once you are reminded that Fitch did lose via unanimous decision, viewers are offered a rare and emotional glimpse into what it's like to be a fighter who was just beat up for 25 minutes on the biggest stage of his sport.

And if you aren't a fan of Fitch, there is still much to capture your interest, because what makes this film stand out is the way the filmmakers weaved in a unique cast of characters who help keep the AKA wheel turning every day.

Most notably, AKA head trainer "Crazy" Bob Cook and Guerilla Jiu-Jitsu instructor Dave Camarillo play a huge role in the film. All you have to do is hear the passion in Cook's voice when he talks about how all he wants is "a homegrown UFC champion" or the emotion when Camarillo says that "this is the biggest thing" he has ever been a part of while staring at a UFC 87 poster, to understand just how close-knit the AKA team really is.

But this documentary is not only about the bright lights of the UFC, we also learn about struggling fighters, such as Matt Major and Nathan Moore, who could only dream of fighting someone like St-Pierre for the UFC title.

(If I could offer one criticism of the documentary, it would be that the film sometimes strays too far away from Fitch. I'm all for featuring other characters at different stages in their respective careers, but I would have liked for the second half of the film to be solely about Fitch and his preparation for the title fight. I sometimes felt as though the film was jumping back and forth too much, and at that point, it's hard to focus on what the true subject is.)

I have had the opportunity to spend some time at AKA, as well as other top MMA gyms across the country, and I can honestly say that few gyms can duplicate the vibe inside that gym located in a San Jose, Calif., strip mall. It may sound cliché, but those fighters are really family to one another, and when a member of that family is gearing up for a title shot, everyone does what they have to do to get him ready for that moment. Of course, that scenario is playing out each and every day in gyms all across the world, but we often don't get to live that roller coaster ride all over again because no one is capturing every moment along the journey.

Tulis, Frank and Osher did just that. If you are a Jon Fitch fan, an AKA fan, an MMA fan, or simply a sports documentary fan like myself, I recommend going out of your way to watch Such Great Heights when it's released in the winter of 2010. You'll develop a whole new appreciation for what it means to be a professional fighter.

Below is a look at a trailer for the documentary, which was released Tuesday. The producers are planning for a small theatrical release, followed by DVD, on demand release, etc.: