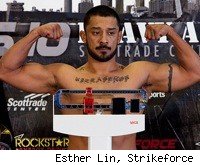 Middleweights Joey Villasenor and Drew McFedries will look to get their careers back on track when they meet at Shark Fights 13 on Sept. 11, the organization recently announced. The fight will take place at the Civic Center Coliseum in Amarillo, TX.

Shark Fights 13 will be headlined by Trevor Prangley vs. Keith Jardine. The co-main event features a light heavyweight bout between Rameau Thierry Sokoudjou and Houston Alexander.

Villasenor (27-7) recently saw his four-fight winning streak come to an end when he lost via unanimous decision to Ronaldo "Jacare" Souza at Strikeforce: Heavy Artillery in May. The former EliteXC 185-pound title contender has only fought twice since his win over Phil Baroni on CBS in May 2008, which is without a doubt his highest profile victory to date.

McFedries (8-6) hasn't competed since he lost to Tomasz Drwal at UFC 103 last September. Since beginning his career with a 5-1 record, McFedries has gone 3-5 in his last 8 fights. Amazingly, only one of those eight fights has gone past the first round, and his three wins came at the 33-second, 68-second and 37-second marks, respectively.