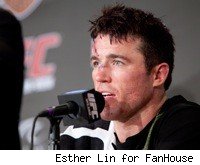 If you catch Anderson Silva on the right day, he can be smiling and happy and have plenty to say about his fight career, where it's been and where it's going.

Tuesday was not one of those days. On a conference call to promote August 7's UFC 117 middleweight championship match against No. 1 contender Chael Sonnen, Silva was quiet and reserved, and even though you couldn't see his face, it was easy to imagine a look of disinterest or annoyance at the questions fired his way.

Sonnen on the other hand, continued his one-man crusade to sell the event as a must-see war and Silva as a champion on the verge of collapse. In a series of alternately amusing and serious monologues, Sonnen trashed the champ's drawing power and declared himself the superior fighter.


More: Anderson Silva to GSP, Shogun: 'Come Fight Me in My Division'

"I fought 12 guys in the top 10. I beat 10 of them," he said. "I fought the No. 1 guy in the world three times, the No. 2 guy in the world two times, I beat them all, every champion in every company there's ever been. Nobody else can say that. I've accomplished far more in this sport than Anderson Silva. He's accomplished far more in this company than me, but he doesn't have the resume behind him let alone the fights or the experience in this sport that I do."

Sonnen's recitation of his resume is a topic for another day, as world rankings vary wildly by site and publication, but the 33-year-old Oregonian, who has a 24-10-1 career record, will have every opportunity to prove his supremacy at the upcoming Oakland event.

Silva, meanwhile, seemed disinterested in any verbal exchanges with the challenger.

"Everyone promotes the fight in a different way," Silva said through his intepreter and manager Ed Soares. "I don't have much to say because there's really not much to say about this. What we're going to do is go out there August 7. Winning or losing, I'm going to do my job and fight. chael talking a lot of s---. It's just not my choice to talk s--- before a fight."

Sonnen, however, disagreed with that mentality, chiding Silva for essentially refusing to create a narrative for the fight.

"He truly thinks people are tuning in to see a fight and not see anything else," he said. "He really means that. He feels he's taking the moral high ground. He couldn't be more wrong. Does he know anything about business? Has this guy ever done anything? That's not what they want to see. They're not just tuning into a fight; they want to know why they're fighting. He comes on here saying something stupid and thinks he's making a Noble Prize-winning statement. He couldn't have this industry more backwards. It's shocking that he actually believes it and stands there with his chest out, like we should pat him on the back, 'Good job Anderson. You're training really hard.'

"Well, guess what, dummy?" he continued. "I've been training really hard since I was nine years old, and I still have time to bring interest to people seeing me whip your ass on August 7."

Sonnen, however, did Silva respect in regards to his cage capabilities. After previously blasting Silva as a "myth" and "boring," it appears he's finally acknowledging that a motivated Silva is among the most dangerous fighters in the world. Silva has won 12 straight fights overall, and his active streak of 11 consecutive octagon wins is a UFC record.

Interestingly though, he said that he's yet to watch video Silva, and only plans to do so sometime in the coming week.

"He's a scary fighter," he said. "There's not a lot of guys you can say that about that are flat-out scary. He's very long, he's vicious, he's sharp in that he's so skinny and sharp. His elbows are sharp, he's knees are sharp, his fists are sharp. He's going to hurt me really bad on August 7. But I'm confident I can deal with the pain, walk through it, go to the hospital that night and leave with the championship belt anyway."

Sonnen, not surprisingly, got the last word.