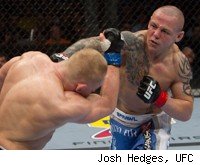 The Ultimate Fighter 9 winner Ross Pearson says when he told Fighters Only magazine that he feels he's a "far better striker" than BJ Penn, he wasn't trying to run his mouth for the free press nor was he necessarily saying he was better than the UFC lightweight great.

"I wasn't calling BJ Penn out," Pearson said during a studio appearance on Monday's The MMA Hour. "I don't think I deserve a shot with BJ. I don't think I'm ready for a shot at BJ Penn. I wasn't trying to get publicity or anything like that. I think I'm a fighter at the end of the day and if I was going to fight someone, I look a the fight where I think I would win the fight. And I feel when my times comes I will be able to prove that I am the best striker in the lightweight division."

In the Fighters Only interview, Pearson was asked how he felt he matched up against the top lightweights in the UFC such as Penn and Frankie Edgar. Pearson compared himself with Penn.

"I think we're very different. We're all very good at doing what we like to do. BJ's ground game and wrestling is unbelievable, but I feel I'm a far better striker than he is," Pearson was quoted in the UK magazine. "I might never be as good as he is at one thing, but he might never be as good as me at another. I'm not near a BJJ black belt, but a fight is a fight and anything can happen, that's what makes the sport so exciting."


From his comments on Monday's show, Pearson wasn't necessarily trying to say he was better than Penn, but as a fighter, he has to pick out where his strength is, and as a striker, he's going to rely on his bread and butter.

"There was no calling out. There was no malice and no animosity. I wasn't trying to call BJ Penn out or anything like that," Pearson said. "But I do feel where I come from, the striking background and how long I've been doing it, I'm a seasoned stand-up fighter."

Pearson has already won three times inside the Octagon and if his rise continues, he may cross paths with Edgar.

But that won't stop Pearson from learning what he needs to know to evolve as a fighter.

"I don't have a problem with it and I think he wants to train with me," Pearson said. "Obviously we, I understand that somewhere down the line we could fight each other. That's just the business [of the sport]. I'm the type of person that, I want to learn from him and he might want to learn from the things I do."

In what Pearson describes as a fight between a stand-up artist and a ground fighter, the Brit will look to pick up new tricks as a kickboxer with Nurse and some added wrestling techniques with Edgar and the Rutgers University wrestling team for his upcoming bout against Brazilian jiu-jitsu brown belt Cole Miller at UFC Fight Night 22 on Sept. 15 in Austin, Texas.