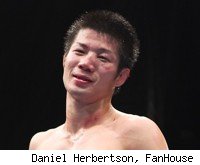 Hioki will be competing for Sengoku for the first time in 2010 and brings with him back to the promotion the Shooto belt, captured in May in a split decision over Takeshi Inoue at Shooto: Like a Tiger, Like a Dragon 3.

In his last Sengoku fight in November, Hioki lost a questionable split decision so off that winner Michihiro Omigawa acknowledged in his victory speech that Hioki was more deserving of the win.

A matchup between Hioki and Pancrase and Sengoku champ Marlon Sandro is on Japanese fight fans' wish list and should be something to look forward to if the promotion can put the fight together sometime this year.

Lawson, a submission fighter out of England, returned to the UK following the taping of TUF 9 without taking on an official UFC fight. Last September, Lawson experienced another setback, a knockout loss in his return fight, but this year moved down to featherweight and stringed together back-to-back submission wins.

The current Sengoku 14 card is below, in reverse order.