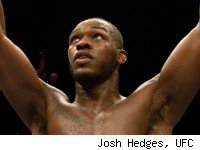 Most UFC fans who will tune in to Versus on Sunday night to watch Vladimir Matyushenko fight Jon Jones are probably unaware of the wealth of experience Matyushenko has in the sport: The UFC has so many new fans that it sometimes seems like there's hardly anyone left who remembers Matyushenko losing to Tito Ortiz in a light heavyweight title fight at UFC 33 in 2001.

But Jones himself says he's keenly aware of everything Matyushenko has accomplished in the sport.

The 39-year-old Matyushenko, who's 24-4 in his MMA career, says he believes the fact that he's been fighting professionally since Jones was in elementary school gives him a significant advantage in the fight.

"Experience definitely makes a difference," Matyushenko said. "It's not just certain moves that I know but it's experience in training and coming into the fight in the best shape I can be. ... It's one of the things I have on him -- I have experience."

But does experience really matter all that much? Most bettors don't seem to think so, as Jones is a huge betting favorite in this fight, and most fans seem to view the bout as just another stepping stone for Jones on his way to light heavyweight title contention. For his part, though, Jones views Matyushenko as his toughest test to date, and he's surprised so many people expect him to win.

However, Jones does want to make one thing clear: He's not the new kid on the block.