Tito Ortiz on Fighting Matt Hamill: 'It Sucks, but This Is Business' 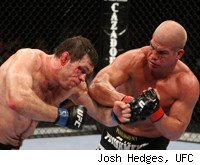 When MMA Fighting broke the news last Thursday that Tito Ortiz's next fight would come against Matt Hamill, many MMA fans were completely surprised, and almost in disbelief. After all, the two had struck up a strong friendship on season three of The Ultimate Fighter, where Ortiz selected Hamill with his first pick as coach, and became a mentor to him throughout the season.

The two have maintained a friendship over the years, but now they're in each other's way as they try to progress up the light-heavyweight ladder, and their paths will meet on Oct. 23 at UFC 121. In a video blog posted to his PunishmentFilms.TV website, Ortiz addresses the prospect of facing his friend.

"It sucks, but this is business," said Ortiz.

Ortiz, who is coming off neck surgery that knocked him out of a proposed UFC 115 matchup with Chuck Liddell, acknowledged that he was not happy about having to fight Hamill, but that he had no choice.

"You won't see any s***-talking from me about Matt Hamill, because I think he's an awesome guy," he continued. "But you're making a better fight when it comes October 23rd, when I cave his face in. No bad feelings, no bad emotions, just punishment, that's what it's about."

Ortiz (15-7-1) is in desperate need of a win, having gone winless since Oct. 2006. Though he's fought just four times since then and faced former UFC light-heavyweight champs in each bout, Ortiz has gone 0-3-1, with his best result coming in a draw against Rashad Evans in July 2007.

Hamill, meanwhile, is 9-2, with four straight wins, most recently defeating Keith Jardine via majority decision. One of those wins, though, came via disqualification. After Hamill had been thoroughly dominated by Jon Jones, he was hit by illegal elbows that forced a halt to the action and resulted in a DQ.