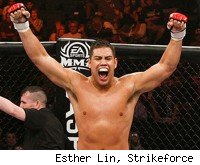 It's been paying off for Del Rosario for quite some time, and now he's 10-0, with nine of his 10 victories coming in the first round.

Del Rosario showed off some punching power, including a left hand that rocked Mahe, but it was Del Rosario's knees that really finished the fight, with a knee to the head and one to the body knocking Mahe down and putting into the fetal position, which is what led the referee to bring the fight to an end. Mahe was no threat to Del Rosario, and it's time for Strikeforce to put Del Rosario in the cage with better opponents.

So who might a better opponent be? There's been talk that Bobby Lashley would fight Del Rosario, but Lashley doesn't want that fight, and it doesn't appear likely to happen. Del Rosario said afterward that he wanted to take on former UFC heavyweight champion Andrei Arlovski, and that fight could make sense. Del Rosario is ready for the big time.