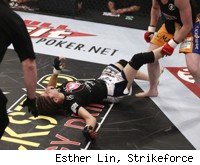 In one of the most stunning endings to a women's fight that mixed martial arts has ever seen, Sarah Kaufman knocked out Roxanne Modafferi by picking her up and slamming the back of her head against the canvas in the third round of their Strikeforce title fight.

Kaufman used it as an opportunity to tell her promoters that they need to do a better jof of promoting her.

"Get me on main cards on Showtime," Kaufman said afterward. "I think I deserve it. Put me on there."

Kaufman is right: The victory was the biggest of Kaufman's career, and it improved her record to 12-0, with nine victories by knockout or TKO. She's one of Strikeforce's best fighters, and she should be fighting on its biggest cards.

The always game Modaferri got things started by charging toward Kaufman and throwing a flying knee at the beginning of the first round, and throughout the fight she was a relentless and tough challenger. But while Modafferi made things difficult for Kaufman in the first round, at the start of the second Kaufman landed several clean punches to Modafferi's face, and she showed throughout the second round that she was the superior striker.

And then came that crazy ending to the third round, when Modafferi pulled guard and attempted an arm bar on the ground, only to have Kaufman pick her up, slam her down and knock her out. A great ending to a great victory for a great fighter.