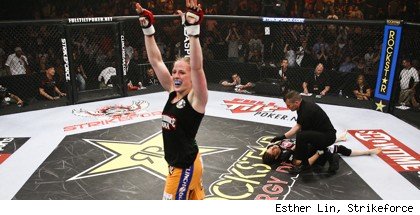 It happened again. For the second time in as many events in the Strikeforce: Challengers series, one of the night's most compelling attractions ended with the winner pleading/demanding to be taken off Challengers and put into a major event.

Last time it was Matt Lindland, who's never been shy about his expressing his opinions. This time it was 135-pound women's champ Sarah Kaufman, who mentioned her desire to be on a proper Strikeforce card every single time there was a microphone nearby.

The thinking behind the Challengers cards is that it's a proving ground for up-and-comers, hence the tagline, "Where champions are made." In theory, that's a pretty solid concept, or at least it would be if so many of the fighters featured on the event didn't openly interpret their own presence there as an insult.

Kaufman's already a champion, and she proved her bona fides with a knockout win over Roxanne Modafferi last night. She also didn't let Strikeforce off the hook in her interviews, never missing a chance to make her discontent known. That might not be the best way to ingratiate yourself to your employer, but, as I predict we'll see when Strikeforce schedules Kaufman's next title defense against Marloes Coenen, it is an effective way of getting the point across.

Biggest Winner: Sarah Kaufman
I know, I know, she was the heaviest favorite on this card, so what's so special about her doing what every oddsmaker out there thought she would? That's a reasonable question, but if you're asking it I can only assume you didn't see the way that fight ended. It's somewhat rare in women's MMA to see someone knocked out cold. It's even rarer to see it done via a "Rampage" Jackson-style slam. Kaufman needed a finish to help her make the case that she deserves to be promoted as a real champion and not some second-tier belt-holder. If you can think of a better way to do that than by slamming your opponent into the land of wind and ghosts, I'd love to hear it.

Biggest Loser: Lolohea Mahe
He said before this fight that it would determine whether his career was headed up or down. Since it was only his seventh pro fight I'm not sure whether a do-or-die mentality was really warranted, but by his own metric it would seem that Mahe has found his limits in this sport. He took some heavy shots from del Rosario, but it was the blow to the body that really shut him down. Clearly, he's a big, tough guy who can hit. He just lacks some of the polish and athleticism that he needs to get to the next level.

Best Prospect: Shane del Rosario
Now that he's 10-0 after dismantling Mahe in the first round, it would seem that Strikeforce is coming around to the idea of giving him a name opponent and moving him off the Challengers cards. He says he's "over" the idea of fighting Bobby Lashley, which is probably just as well in Strikeforce's eyes, but Andrei Arlovski would be an opponent that makes a lot of sense for him. One way or another, someone's getting knocked out in that fight. Then Strikeforce will have another heavyweight to promote, which is never a bad thing.

Loss Most Symptomatic of Cultural Differences: Roxanne Modafferi
She might be from New England, but Modafferi definitely fights like many Japanese fighters. She doesn't have a ton of head movement, but she wants to get in close, tie up, and get to the mat. She did that a couple of times against Kaufman, but lacked the sense of urgency necessary to avoid the quick stand-ups on an American fight card. Her single-minded focus on getting the submission cost her in the end, as she held on to the arm she was trying to trap even as Kaufman drove her into the mat. She's a tough girl with an infectious enthusiasm and a great personality, but like Shinya Aoki, maybe she could benefit from a training camp in the states.

Best Case of Toughness Trumping Skill: Bobby Voelker's win over Cory Devela
Pretty early on Devala showed that he was the more technically proficient fighter with more weapons in his arsenal. Voelker did well just to last through the first round, but then his resilience started to pay off as Devala faded a bit in the later rounds. Let that be a lesson to all you young fighters out there. You don't always have to be better than the other guy; sometimes it's enough to just be able to take everything he's got and keep coming after him.

Most Mediocre Case for a Title Shot: Mike Kyle's win over "Abongo" Humphrey
Judging by the commentary and the post-fight interview by Mauro Ranallo, Strikeforce is eyeing Kyle as a future contender for the light heavyweight title after "King" Mo Lawal and "Feijao" Cavalcante square off for the strap in August. Kyle owns a win over Cavalcante, but I'm not sure if his performance against Humphrey warrants a shot at the gold. He got taken down much too easily and looked very beatable on the mat. I realize Strikeforce doesn't have a ton of talent at 205 pounds that could or would (looking at you, "Babalu" Sobral) challenge for Lawal's title, but if he gets past "Feijao" you can bet the King is going to be more interested in moving up in weight that thumping on an also-ran like Kyle.