A Refreshing Piece of Candor on a K-1 Broadcast 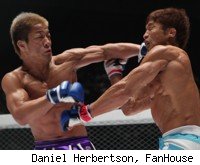 One of the problems that plagues combat sports broadcasting is that the television announcers are so closely aligned with the promotions whose fights they call that the broadcasters often start to sound like promoters themselves. The fans are told that every fight they're watching is great, even if their two eyes tell them something different.

That's why Michael Schiavello and Mike Kogan deserve a ton of credit for the way they called the Kazuyuki Miyata vs. Kazuhisa Watanabe K-1 World MAX tournament fight that aired on HDNet Friday.

As Miyata and Watanabe flailed at each other and showed off an ugly lack of kickboxing skill, Schiavello questioned what the two of them were doing as the primary reserves in the tournament.

"This is a strange fight to have as the reserve fight because honestly, neither of these men could go into that tournament," Schiavello said. "They would get murdered."

Kogan was even more blunt.

"Don't get me started," Kogan replied. "I might get fired for this, but no, of course not. It's ridiculous. Beyond ridiculous. This fight is ridiculous."

Miyata won the fight by unanimous decision, but Schiavello made sure the fans watching at home didn't believe they were watching a high-quality kickboxing match, saying, "Miyata has no place in a K-1 ring."

As the fight wrapped up and Schiavello and Kogan continued to call it like they saw it, Kogan said, "I'll probably be fired after this."

He ought to be rewarded. Unlike the two fighters, the two broadcasters did their jobs beautifully.