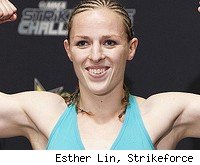 This is the Strikeforce live blog for Sarah Kaufman vs. Roxanne Modafferi, the women's 135-pound championship bout on tonight's Strikeforce Challengers 9 card in Everett, Wash.

The undefeated Kaufman (11-0) puts her belt on the line against Modafferi (15-5), who is coming off a win over highly-regarded Tara LaRosa.


Round 1: It's on! Modafferi rushes towards Kaufman at the sound of the bell and jumps into clinch. They battle for position, taking turns pushing the other against the cage. Modafferi eventually pushes Kaufman down, but Kaufman quickly places her own back against the cage to try to escape. However, Modafferi is able to turn to her right and place Kaufman on her back. Modafferi punches, but still, referee calls for action. Premature call by the referee to stand them up. That's not going to bode well for Modafferi if the referee continues to officiate like this. Short exchange and they are back in clinch. Modafferi is working hard for a takedown but Kaufman is doing a good job defending. Round one ends in clinch.

MMAFighting.com scores the round 10-9 for Modafferi.

Round 2: Modafferi is throwing her hands and legs out there, but they're empty. The strikes, including a Superwoman punch, allow Kaufman to land counter shots. We can tell Kaufman is the far better striker of the two. In trouble, Modafferi drops for a takedown but Kaufman defends. They return to clinch where Kaufman aggressively digs for the underhooks. Modafferi looking for a pick and Kaufman unloads with punches. Modafferi throws a spinning backfist but it's really just for show. She pulls guard, but Kaufman maintains her posture, forcing Modafferi to open her legs and land on her feet. Kaufman landing the better knees in clinch. Modafferi almost lands a hip toss, and Kaufman almost reverses. Back in clinch. Kaufman continues to land more knees. They separate with 20 seconds left and Kaufman connects cleanly on about nine punches.

MMAFighting.com scores the round 10-9 for Kaufman.

Round 3: Quick exchange of punches and they tie-up. Modafferi trips Kaufman at the 3:39 mark and she works inside the closed guard of Kaufman. Modafferi stands up in an effort to pass. Kaufman waits for an opening and kicks her way to her feet. They return to clinch halfway into the round. The referee pauses the fight to cut a small piece of loose tape off Kaufman's glove. Kaufman with a jab, cross. Modafferi pops out jabs and she eats another jab, cross. They trade knees in the Muay Thai clinch. Modafferi jumps into guard with 30 seconds left. Modafferi looks for an armbar, but Kaufman picks up Modafferi and slams her down. Modafferi is dazed and the referee jumps in!