MMA Knocked Out of North Vancouver 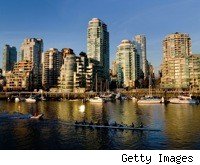 "I've watched enough of it [Ultimate Fighting Championship] channel surfing to know that I find it repugnant ... barbaric," Coun. Pam Bookham was quoted as saying in the report.

This decision has led to some confusion within the Canadian MMA community. North Vancouver and Vancouver are two different municipalities run by two different governments. So while the future of MMA is still bleak in Vancouver, the disbanding of the NVAC has nothing to do with the Vancouver Athletic Commission.

"The NVAC was a sham," The Score's Paul Lazenby told MMA Fighting. "Mike Pattenaude sat on it, and he's partners with promoter Mike Hammoud who makes Don King look like Mother Theresa. Them dying just means that there will be no shady shows taking place under 'commission sanction.'

"The VAC is now in city council's pocket. They've installed their own guy as chairman [Dave Rudberg], and the other members have been bullied and frightened into toeing the line by such measures as removing their protection from potential indemnity. Professional MMA is dormant in Vancouver, and it will take a lot of pressure to revive it.

This news comes after former chairman Mirko Mladenovic, a supporter of MMA, was impeached as head of the VAC and replaced by city bureaucrat Rudberg.

"The VAC is significantly weakened now, but at least it was a powerful, relevant organization for some time. The NVAC was always a fart in the bathtub run out of 100% self-interest as opposed to legitimate desire to clean up the sport."

And if you thought things might have turned for MMA in Vancouver, the site of UFC 115, since we last wrote about the story, think again. Lazenby says the two-year trial period instituted in December 2009 to allow MMA events in Vancouver is another kind of sham.
"City councillor Kerry Jang has stated that they have to do 'impact assessments' and other related bullsh** before approving any more events. Promoters asking to be held to the same guidelines that UFC followed have been told that UFC had a 'secret deal' that can't be divulged or offered to others.

"In other words, the trial period was always intended as a palliative measure that would make us happy enough to go away. City council got caught flat-footed by Dana [White]'s immediate announcement that he wanted to run Vancouver, and stymied by a**holes like me daring to show up at VAC and city council meetings and subsequently name names regarding who was trying to drag the process of sanctioning out long enough to kill UFC 115.

"The trial period is a lie. It's a catch-22. We're allowed to run during the trial period, but we have to observe promotional regulations. However, when we ask what the regulations are, we're told, 'We can't tell you that --we're still working on it. Just leave it with us and we'll get back to you.' Right. And the check's in the mail."

So while the VAC is still technically breathing, the writing on the wall predicts a similar demise to North Vancouver.

Ed. note: Updated at 7:42 PM to clarify difference between North Vancouver and Vancouver.