Don't Like MMA's Double Standards? Then Do Something About It 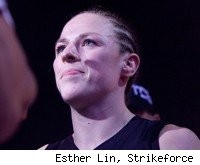 She thinks there's a double standard that's keeping her pay low and her fights on the lesser-watched Challengers series events. She's right.

She thinks – if I may paraphrase her position – that this is some unfair, possibly sexist crap. Again, she's right.

If you take a good look around at the world of pro fighting, you'll see that double-standards are everywhere. That's why one guy who's undefeated in five fights against a series of professional opponents gets paid and promoted like a star, while other, more deserving fighters get used as undercard fodder.

Much like the "Twilight" movies have shown us, popularity trumps talent at the box office.

As much as we might like it to be, MMA is not a pure meritocracy. Once the cage door shuts, sure, then the hyped-up paper tiger bleeds just like anyone else. It's just that with the right promotional push he gets paid far more to do it, and he usually also gets to pad his record with easily crushable cans before he's finally forced to take a beating for his cash.

That's not to say Kaufman doesn't have a legitimate gripe. If she were an undefeated, top-ranked male champion, you better believe Strikeforce wouldn't be wasting her on a Friday night show in Everett, Wash. But, whether it's right or not, the rules are different for male and female fighters.

In order to become stars, female fighters need a hook. Gina Carano's was her looks and, to a lesser extent, her charm. Cristiane "Cyborg" Santos' hook is her impressive physique and her ability to punch a hole in someone's face.

Kaufman? She's sort of articulate. She's affable enough. She likes to hit people, though she hasn't finished a fight in a little while.

What she doesn't have is that one thing, the single-sentence descriptor that will put butts in seats. She's a little bit like a female Jake Shields in that sense. Other fighters know how dangerous she is, but she's not a human highlight reel or a magnetic personality or a one-person comedy show on the mic.

Instead she's just a very good, very solid fighter with no outstanding personality features. There's nothing wrong with that, but rarely have I ever seen a fight promoter looking to the heavens and praying to the gods to send him a fairly nondescript female champ.

Is it frustratingly unfair that this is why Kaufman's legitimately interesting title defense against Roxanne Modafferi is on a Challengers undercard? Yes. Is it more than little sexist? Probably. But if we don't like it, we have ourselves to blame. Maybe Strikeforce hasn't exactly worked up a sweat promoting Kaufman lately, but fans and media haven't complained all that loudly either.

Organizations aren't just guessing who fans might want to see. They do their research and they find out who sells tickets. That's why Bobby Lashley is going to make many times what Kaufman will when he takes his spot on the main card in August, despite the fact that he hasn't beaten anyone who wasn't hired to lose.

Fans are voting with their pocketbooks, and MMA promotions everywhere are listening. It would be wonderful to see all male and female fighters treated equally. In some egalitarian alternate universe where everyone gets exactly what they've earned and what they deserve, that's probably what happens. But in case you haven't noticed, we don't live in that world.

That's not to say we can't live in it, or that it's too late to change who we reward and for what. Just know that promoters are giving us what we've demonstrated a willingness to pay for. If we don't like what that looks like, we should start sending them a different message.