Caros Fodor Apologizes for His Performance in Beating Thomas Diagne 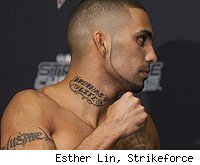 In fact, Fodor, who improved his pro MMA record to 6-2, said immediately following the fight that he felt like he only showed off about 60 or 70 percent of what he can do, and he offered the fans an apology for letting the fight go to the judges' scorecards.

"I really don't have an excuse, I was a little bit off," Fodor said. "I apologize for that."

It didn't look like it would go the distance in the early part of the first round. Fodor knocked Diagne down with a left hook, kneed Diagne in the body when he got back up, and then knocked him down again with another left hook.

But Diagne, a Frenchman who trains with Cung Le and Josh Thomson, managed to recover, and he showed some toughness in defeat. Fodor nearly submitted Diagne with a keylock a couple of times, but Diagne managed to escape from every submission attempt.

Still, Fodor dominated the fight sufficiently that all three judges scored it 30-27. It was a solid showing for Fodor, even if he felt he had to apologize for it.