Building a Road to the Future for Japanese MMA 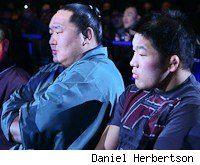 "Slow and steady" may be good words to use to describe the growth of World Victory Road's Sengoku Raiden Championship up until this point. Attendance numbers are solid but not great, some interesting talent has come in and some has left, the quality of the event is getting better and they have slowly become a profitable venture.

That is what the public see though. First under the direction of Takahiro Kokuho and now under Mukai, Sengoku and has been signing some of the biggest prospects in Japan, creating a development program, building gyms, holding tournaments and setting up the potential for growth that is anything but "slow and steady".

Despite Jadamba Narantungalag's high level kickboxing, Akihiro Gono is being fed a sacrificial lamb for his debut at lightweight at SRC 14. While that may be the case, the fact that Narantungalag fights out of Team Asashoryu is the real point of interest in this bout.

Still only 29 years old, the retired yokozuna has faked injuries to skip tournaments, was the first top ranked sumo to be ever be disqualified, broke the mirror off a rival's car, was accused of match-fixing and got drunk and broke a waiter's nose. These may seem like reasonably tame incidents to Western readers but in the highly traditional world of sumo in Japan, Asashoryu has reputation and infamy equal to that of Mike Tyson.

Back in March Asashoryu claimed he hadn't really thought about entering MMA yet but the creation of "Team Asashoryu" now would indicate otherwise. We are a still a long way from seeing his debut but if Asashoryu were to fight MMA he would most likely be fighting in Sengoku, he would be the highest profile signing in Japanese history and he would bring in huge cash for the promotion.

Sengoku are starting to develop a reputation for signing big names locally.

Beijing judo gold medalist Satoshi Ishii was one of the most sort after free agents in all of MMA in 2008/2009. Sengoku beat out the UFC and DREAM to secure him and immediately secured a new major sponsor in security company Senko.

But rather than throw these new fighters to the wolves (or Bob Sapp, while dressed as a comic book character), many have been placed into a development program.

From their conception Sengoku has been putting "training players" of all levels into a program that is meant to support fighters through the initial stages of a professional MMA career.

Maximo Blanco and Shigeki Osawa were the first recruits and they have been given financial aid, placed in appropriate dojos (Sengoku are also opening their own dojo in the coming months), provided with jobs that will be flexible around their fighting career, been given mentoring and advice at seminars and recently took part in a Sengoku sponsored summer training camp.

Training players gain experience fighting in lower level shows, Sengoku preliminary fights or in televised tournaments called Sengoku Gold Cup which have been held in Japan and Korea (with no audience à la The Ultimate Fighter). No fighter is kicked out of the development program for losing a fight and applications to the program are open to anyone.

It's completely different to the approach that DREAM took with Tanaka and the structure and support in the program is something that no other promotion in the world offers.

Sengoku's tournaments are vastly different also. DREAM's tournaments have been largely focused around fighters left over from Pride and K-1 Hero's and we really have only seen a handful of new talent emerge. Sengoku did not have that option and so were forced to think more creatively. We are now seeing a massive bantamweight tournament open to anyone in Asia and a welterweight tournament for fighters who are looking for a second chance in their MMA career or who haven't quite made it big. The featherweight tournament with consistently tough matchmaking for every fighter all the way through was also very different from the DREAM equivalent with Norifumi "KID" Yamamoto getting to choose the weight limit and getting a free pass to the second round.

DREAM's injection of cash should go a long way to helping the promotion out of it's current slump but one has to wonder what they will do with the money.

Sister promotion K-1 has the high school "koshien" fights, the excellent 63 kg Japan tournament and they are well known for bringing in new talent from all over the world but we haven't seen anything at all like that from DREAM yet. Aside from a very ambiguous info-graphic with the words "Global Expansion Plan", we have no idea how DREAM is setting themselves up to grow and we have seen very little planning and investment in the future.

Sengoku though is clearly setting up the potential for growth. "Slowly and steadily" they are acquiring new talent from partner promotions Shooto and Pancrase, setting up a system to develop their "training players" and signing the occasional big name to bring in the sponsors. Not everything has worked out so far but Sengoku's base is now spread so wide and has such structure that rapid growth and success over the coming years is inevitable.

Even if DREAM has the cash, they will still have rival who is more than worthy in Japan.