Strikeforce: Challengers 9 -- By the Odds 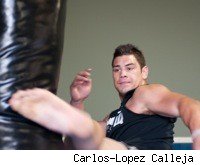 The midsummer MMA drought is drawing to a close not with one single deluge, but with a few tricking rain showers that will lead us into the August storm. Up this Friday night is the next presentation in the Strikeforce: Challengers series, this time from Everett, Wash., also known as the city that's just close enough to Seattle to make you wonder why you didn't just drive the extra half-hour on your road trip and stop there instead.

We already know that Strikeforce 135-pound women's champ Sarah Kaufman is none too pleased about being relegated to the undercard of a Challengers event for her title defense against Roxanne Modafferi, but what else is there to see on this card, and who are these people, anyway? As a follow up, what kind of degenerate would you have to be to bet on this action?

The answer to at least one of those questions awaits you below.

Shane del Rosario (-365) vs. Lolohea Mahe (+285)
You might know del Rosario as the guy who would probably be fighting Bobby Lashley right now, if only it didn't seem so likely that he'd win. He's 9-0, has great striking, good agility for his size, and he knows how to finish a fight. He might be one of the best heavyweights you've never heard of, unless you've heard of him, in which case you're probably a real know-it-all. Mahe seems like an 'opponent' in the boxing sense of the word here. That's not to say he can't win. A guy his size only needs to hit you once for it to shatter your equilibrium. At the same, if del Rosario doesn't crush him it will be a shock.
My pick: del Rosario. I'm telling you, don't sleep on this guy. With a little more seasoning, he could be a contender.

Sarah Kaufman (-500) vs. Roxanne Modafferi (+325)
Long odds aside, this has the potential to be the best fight we've seen in weeks. I realize the competition isn't all that stiff, especially after Impact FC, but still. Instead of thinking of it as a travesty that this fight is stuck on a Challengers card, think of it as a gift. Kaufman is going to come forward looking to punch Modafferi until she falls down, and Modafferi is going to try to give just enough back to help her eventually put her jiu-jitsu to work.
My pick: Kaufman. I'm kind of surprised to see the betting line so lopsided, because Modafferi's no pushover. That said, Kaufman will be too powerful for her down the stretch.

Mike Kyle (-185) vs. Ron Humphrey (+155)
After Kyle's now disqualification loss to Brian Olsen, he should be glad any organization is willing to have him. I know it was four years ago, but seriously, watch the video and tell me that's not some horrible stuff right there. Now he's paid his debt to the MMA society, I suppose (though Olsen and his fractured face might beg to differ) and he finds himself in a scrap with the very resilient "Abongo" Humphrey, who's one of the few men who can say he slapped a guillotine on a guy named George Bush and didn't have to answer to the Secret Service afterwards.
My pick: Humphrey. When in doubt, I always go with the fighter who hasn't shown himself to be of questionable moral fiber. It's this weird hang-up I have.

Corey Devela (-200) vs. Bobby Voelker (+160)
Loyal Challengers enthusiasts (if in fact they exist) might remember Voelker as the guy who took a beating from Roger Bowling in May before an accidental eye-poke halted the bout. He was on his way to losing that one anyway, but Devela is certainly a more manageable opponent. Devela is 9-4, has been away from the sport since June of 2009 while dealing with some personal matters, and posted two straight losses in his last two bouts. He's still a dangerous guy, but when you factor in cage rust and Voelker's edge in experience, it's hard for me to see why Devela's a 2-1 favorite.
My pick: Voelker. Sure, he was getting battered by Bowling, but he showed real toughness. If he takes Devela past round one, he wins this.