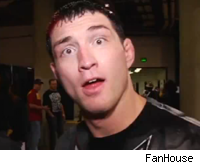 Strikeforce fighter Jason Mayhem Miller thinks CBS announcer Gus Johnson is an "idiot" for his comments at the end of the April Strikeforce show, and UFC announcer Joe Rogan agrees with that assessment.

In a wide-ranging discussion on Rogan's UStream show, Miller and Rogan expressed their agreement with what many MMA fans said immediately following the CBS broadcast: Johnson made a bad situation even worse by describing the brawl following the main event as the kind of thing that just sometimes happens in MMA.

Miller, who provoked the brawl that broke out in the cage by confronting Jake Shields following his victory in the main event, said that as he was being hit by Shields' entourage, "The freaking idiot Gus Johnson goes, 'Gentlemen, this is national television.' I'm like, 'Ha ha, no s**t'."

Rogan sounded disgusted as he then asked Miller, referring to Johnson, "What's up with that dude?"

Rogan then said, "You're entitled to your opinion," before saying Johnson's voice makes him sound like he's "in a mold."

To some extent I think Miller is being unfair to Johnson here: Miller is, after all, the one who got the ugly events at the end of the Strikeforce show started. If Miller had stayed out of the cage, Johnson wouldn't have said what he said.

But while I've been a fan of Johnson's work on college basketball, I tend to agree with those who think Johnson doesn't bring his A-game to MMA.

Video of the Rogan-Mayhem conversation, which includes some profanity, is below:

Bloody Elbow has more from Rogan and Miller.