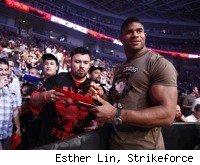 During Alistair Overeem's two and a half year absence from Strikeforce, it was quietly (or not so quietly, depending on who you were talking to) discussed that the reason why "The Demolition Man" had not returned to the United States was because he didn't want to take a pre-fight drug test administered by the athletic commission.

But Overeem showed up in St. Louis in May, beat Brett Rogers convincingly, and passed his drug test with no problems in between.

However, if you think the heavyweight champion is going to gloat about passing the test amidst accusations that he was using performance enhancing drugs, think again.

"So I just knew it was just getting through the stormy weather, or as you say to weather the storm. Let them talk, and I'm going to keep focusing on my training. And, yeah, I basically just did that. You know, you focus on what you can affect, and other people's opinions and other people's voices, yeah, you can't affect that. So let them talk -- I can't do anything about that anyway."

There's a good chance Overeem's next fight could take place in the United States, as well. The Dutch fighter is deciding between fighting on the October Strikeforce card, which could air on CBS, or competing in K-1 in Japan.