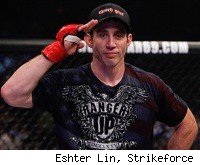 When word first leaked that Jake Shields would be vacating his Strikeforce middleweight title en route to signing a new contract with the UFC, the thought, according to Strikeforce officials, was to set up a tournament to crown a new 185-pound champion.

But somewhere along the line, the plan changed, and the organization booked a vacant title fight between Tim Kennedy and Ronaldo "Jacare" Souza at Strikeforce: Houston on Aug. 21.

Kennedy stopped by The MMA Hour Monday, and said he was legitimately surprised when he heard the change of plans.

"Jacare" has looked dominant since making his Strikeforce debut late last year. He's 2-0 against tough veterans Matt Lindland and Joey Villasenor. But Kennedy, who's 3-0 in Strikeforce, sees holes in the Brazilian's game, and is expecting to exploit them next month.

"I think I'm a better wrestler. He's amazing, he's the best in the world, when he's on top. I think he's going to have a real hard time getting me there, which means that every time he comes to get me there, he's going to get hurt.

"I'm in the best shape of my life. I'm training with the best people on the planet. I'm, like, all stops are out for my fight camp, just everything's right right now. You know, I feel good."

Since 2004, Kennedy's primary focus has been his military career. But Kennedy, a Green Beret who was awarded a Bronze Star for his time in Afghanistan, is now devoting all his time and time attention to his budding MMA career, and it is clearly paying off on all fronts.

"My priority has been the military, representing special forces, and doing my missions for the past six, seven years. That has shifted here in the past year. I'm able to train full-time. You know, when you train full-time, you're going to have results of being a full-time athlete. I did OK when I was just training part-time, but I'm training full-time right now, and I'm getting stronger every day. I'm getting faster every day; I'm getting techniques I could never pull off before. My footwork, my timing, my head movement, all the stuff that was talked about me before is changing.

"I have the greatest coaches in the world, and I just think that I'm going to keep getting better."

Kennedy's decision to compete in MMA full-time will pay off Aug. 21 when he fights for the Strikeforce 185-pound title, perhaps even sooner than he thought.

(Ed. note: Watch this week's edition of The MMA Hour below).