The Truth About Losing 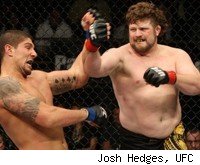 Brendan Schaub felt sure that people were staring at him. No matter where he went, whether he was among a crowd of strangers or trusted friends, he could feel their eyes on him.

"I felt like I'd walk into the mall or a room somewhere, even the training room, and people would be like, there's the guy who got knocked out," Schaub said. "I just felt so embarrassed."

That embarrassment stemmed from his first, and so far only defeat – a knockout loss to Roy Nelson at the "Ultimate Fighter" 10 finale last December. Afterwards, when he went back home, Schaub spent the next two weeks convinced that there wasn't a soul in the world who hadn't seen him get floored on live TV.

"It was the worst night of my life. I felt like my career was kind of over. I felt like I let everyone down – my family and friends, everyone."

Schaub's malaise isn't at all uncommon among fighters after a defeat. For many of them, it's the worst thing they can experience in their careers, maybe even their lives. At least, that's what it feels like at the time.

Imagine you've spent the last six to eight weeks preparing for one moment. Imagine your entire future – your finances, your career path, even your identity – will be shaped by what happens in that moment. You've suffered for it, made every sacrifice you can think of for it. It's the only thing that seems to matter.

Now imagine that when the moment arrives, you blow it. You blow it so clearly and so completely, there is no point in even discussing whether or not you've blown it. Even if you wanted to forget about it, a quick Google search yields videos of you blowing it, along with thousands of words from reporters and bloggers and message-board posters describing in excruciating detail how thoroughly you blew it and opining on what the rest of your life will look like post-blowing it.

Go through that, then see if you want to do it all again a few months later. See if you can walk back in there without feeling yourself hovering over that void, just waiting to drop.

"The fear of losing, I've seen it paralyze fighters before," said Pat Miletich, who's tasted defeat as a UFC champion and as a world-renowned trainer. "With most guys, guys at this level who are true fighters, they're not worried about getting hurt; they're worried about losing."
"Fear of failure is a powerful, powerful thing. It's the worst place for you to be in. It creates more stress, and the stress makes it less likely that you'll be able to cope the way you need to cope in a fight, before a fight and after a fight."
-- Dr. Ted Butryn
And yet, according to Dr. Ted Butryn, an associate professor of Sports Psychology at San Jose State University who's done two separate studies on the mental preparation and post-fight coping strategies of MMA fighters, worrying about losing is the least helpful thing you can do.

"The fear of losing, in all the research, is about the worst thing you can deal with," Butryn said. "Fear of failure is a powerful, powerful thing. It's the worst place for you to be in. It creates more stress, and the stress makes it less likely that you'll be able to cope the way you need to cope in a fight, before a fight and after a fight."

According to Butryn, fighters who use defeat as a learning tool rather than as a minor death, those are the ones more likely to be successful. There's a similar dichotomy between the fighters who attribute a loss to a mistake they made and can fix, versus those who look for any excuse to explain it away.

"It's called locus of control. Something happens, you lose the fight, but how do you make sense of that? Is it, the ref blew the call or the guy was greased or you took the fight on short notice? That's external locus of control. Internal is, 'You know, I didn't execute. My corner said to take him down and I didn't. They said circle right and I circled to his strong side. I did this.' The research is pretty clear that people who attribute it to something they did – whether it's true or not, it doesn't matter – they're going to be more successful than the people who constantly talk about bad luck or the ref or bias or whatever."

That, said Jeremy Horn – a veteran of over 100 pro fights and 19 defeats– is the toughest thing to deal with.

"I get over it a lot quicker when I can pinpoint exactly what I did wrong. My second fight with Chuck [Liddell] was the hardest to get over, because I didn't make any big glaring errors that I could see. It was just the whole fight. Whereas, when I fought [Nate] Marquardt I shot in and left my neck out there and got caught. That was actually easier because I knew exactly what I did wrong."

The key, according to Butryn, is focusing on the process instead of the outcome. Contrary to what many of us may have come to believe about athletic competition, focusing on the end result isn't particularly helpful. But in a sport where the winner gets paid and the loser often gets shown the door, putting the result out of your mind is easier said than done.

"It's hard, and a lot of the guys I studied talked about the economics of losing," Butryn said. "You lose one fight and now you're not on the pay-per-view card, you're on the prelims. Lose another and now you're not even on the prelims, you're on the Spike show. Then your sponsors get upset because they don't get the exposure. There are economic consequences to losing. ...Focusing on the process can be a tough sell, but I would ask, what else do you have?"

Not much, except perhaps the support of teammates who have been in your shoes. MMA may be an individual sport, or at least look like one on fight night, but in Butryn's studies each fighter's camp played an integral role in helping him cope with a loss.

So it was for Brendan Schaub, who after two weeks of feeling like he was the center of the world's negative attention, opened up and told his teammates what he was going through.

"Rashad Evans and Nate Marquardt and those guys, they just told me, look man, that's not the case," Schaub said. "What helped me most, I think, was Keith Jardine told me, 'I know this loss hurts and it feels like the worst thing that can happen, but the best thing I can tell you is I feel sorry for whoever has to fight you next.' And that was Chase Gormley."

Three months after losing to Nelson, Schaub knocked out Gormley in the first minute of the first round. It was a great night. The victory felt like the only way to truly put the loss behind him, Schaub said, and it helped cement the lessons he'd learned in the previous fight.

Gormley? He got dropped from the UFC after getting beat by Schaub. His most recent fight was a fourth-round TKO loss to Mike Whitehead in Mt. Pleasant, Mich., on July 10. Another terrible night. Another plummet into that depression, that void. Another chance to decide for himself what to make of it.

"The Truth About..." is a recurring feature on MMAFighting.com that takes an in-depth look at various aspects of the sport from the fighter's perspective. Read the first installment, "The Truth About Fighting Hurt."