Rampage Jackson vs. Lyoto Machida in November Likely, but Not Finalized 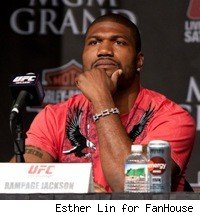 If signed, it would be a battle of former UFC light-heavyweight champions, but a reported Quinton "Rampage" Jackson vs. Lyoto Machida matchup has yet to be officially added to the UFC calendar.

That's the word coming from UFC President Dana White, who responded to an MMA Fighting inquiry about whether the bout was finalized with a text reading "Not yet."

Still, at least one of the fighters has agreed to it. A source with knowledge of the situation confirmed to MMA Fighting that Jackson has agreed to the November bout.

Some sites have reported that the bout will take place on Nov. 20, but the source said the date and location of the fight have yet to be decided. A Nov. 13 event in Germany is a possibility for the bout as well.

Both fighters are coming off losses. Jackson dropped a unanimous decision to heated rival Rashad Evans at UFC 114 in May. Still, the ex-champ is likely at the height of his popularity. UFC 114 reportedly sold over 1 million pay-per-views, while his first major Hollywood film, The A-Team, has made over $135 million in worldwide box office.

Jackson is soon to finish up his film promotion obligations and then is likely to return to training to prepare for Machida. With a lifetime record of 30-8, Jackson has never lost back-to-back fights in his career.

Machida, meanwhile, is also hoping to get back into the win column after suffering his first career loss. At UFC 113 in Montreal, he was knocked out by Mauricio "Shogun" Rua. The loss cost Machida his belt and put the first blemish on his stellar record. He's now 16-1 overall.