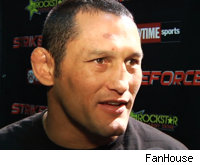 It's been three months since Dan Henderson walked out of the Strikeforce cage in Nashville, and the legendary MMA veteran is awaiting his next assignment from the organization.

According to his manager Aaron Crecy, Henderson is expecting to return in the fall.

"We don't have a date," he said. "I've heard October or November, but I don't know that anyone knows for sure just yet."

One man who's hoping to be standing across the cage from Henderson to greet him upon his return is Renato "Babalu" Sobral, who defeated Robbie Lawler in a June fight, and then asked to face Henderson in a rematch of their 2000 Rings fight, which Sobral lost via split decision.

"We haven't been offered the fight but we're pushing it and hoping for it, and Dan at least in the media, has seemed agreeable to it," said Sobral's manager Richard Wilner.

Strikeforce CEO Scott Coker has said the fight is a possibility, but has yet to make a final decision.

Henderson, coming off the title fight loss to departed champ Jake Shields, is not so focused on a single opponent. When asked about his client's interest in facing Sobral, Crecy was non-committal.

"I don't think he cares," he said. "I think the one talking about that fight is Babalu. Dan hasn't said much about it, but Dan doesn't usually care one way or the other. He's more focused on locking up a date. As far as who he's facing? He doesn't care."

Crecy said that Henderson was more likely to fight at light-heavyweight than at middleweight, but either was possible. Strikeforce is reportedly considering a middleweight tournament that would determine the No. 1 contender to face the winner of the upcoming Tim Kennedy-Ronaldo "Jacare" Souza title fight. Henderson hasn't been suggested as a possibility, but asked if the former PRIDE two-division champ would consider it, Crecy did not dismiss it out of hand.

"Again, he's more interested in when he's returning," he continued. "We know it will be in the fall, it's just a question of exactly when."

Sobral, too, is training with the intention of a fall return. A CBS show is rumored, and if it materializes, he hopes to be included. His last fight took place at a 195-pound catch weight with an eye towards moving to middleweight, but now it appears that's unlikely to be a long-term probability.

"We want the [Henderson] fight," he continued, "We think it makes sense for both fighters, and objectively speaking, we think it's a pretty marketable fight."