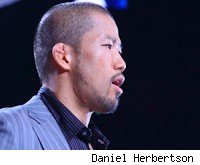 As just another sign of Japanese MMA fighters taking weight-cutting seriously, veteran Akihiro Gono will move down to lightweight for his next fight against Jadamba Narantungalag at Sengoku 14 on Aug. 22 in Tokyo.

The move comes after 16 years and 54 fights in the welterweight and middleweight divisions.

The highlight of the 35-year-old's career was his 2006 run in PRIDE's 183-pound Grand Prix where he defeated future champions Hector Lombard (Bellator) and Gegard Mousasi (Dream and Strikeforce).

Caol Uno and Mitsuhiro Ishida are two other recent Japanese names moving down in weight, both to featherweight after lengthy careers as lightweights.

Sengoku announced Tuesday Gono's fight as well as a welterweight tournament reserve bout between Motoki Miyazawa and Takuya Sato. The current card is below, in reverse order.