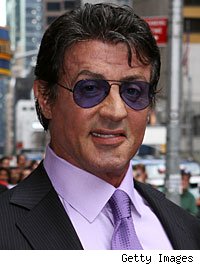 Sylvester Stallone's upcoming movie The Expendables features an all-star cast of Hollywood tough guys including Stallone himself, Arnold Schwarzenegger, Bruce Willis, Dolph Lundgren, Mickey Rourke, Jet Li, Jason Statham, Terry Crews, and Stone Cold Steve Austin. But Stallone says that when the whole cast got together, there was no question who the toughest guy in the room was: Randy Couture.

Talking to David Letterman on Monday night, Stallone talked up Couture as the guy who made the other guys uncomfortable during the fight scenes, and Letterman showed a healthy respect and admiration for Couture's accomplishments in the cage.

Letterman: "Who else is in it? A lot of tough guys?"

Stallone: "You know what? They don't know their own strength. Randy kept air-mailing people. We shot in an old fort with solid brick walls, and I would notice these stunt men hitting the walls, and finally, they were begging me, 'Don't let him touch me anymore. I can't take it. I'm so beat up I can't breathe.' Steve Austin is a tough guy but he was going, 'Please, take me out.'"

Letterman: "They're the real deal."

Stallone: "Someone asked me, 'You put all these tough guys, Dolph Lundgren, Jet Li, in a room together, who comes out?' If you walked in 10 minutes later you'd see Randy Couture sitting on top of us having a chocolate fudge sundae."

Couture is actually a five-time champion, but other than that, it was a great example of MMA getting some mainstream recognition.