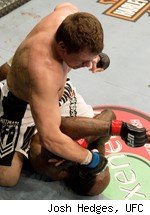 Spike TV on Tuesday announced it will once again have a live broadcast of preliminary card fights leading into a UFC pay-per-view.

The cable network, as it has regularly done since UFC 103 in Dallas last September, will show two preliminary card fights live. The UFC 119 heavyweight bout between Matt Mitrione and Joey Beltran and middleweights C.B. Dolloway and Joe Doerksen will serve as a lead-in to the pay-per-view broadcast.

As is typical, additional taped fights from the preliminary card could be shown depending on the length of the two live fights.

Mitrione, who splits his training time between Indianapolis and the Duke Roufus camp in Milwaukee, is 2-0 in the UFC with knockouts over fellow Season 10 castmates on "The Ultimate Fighter" Marcus Jones and Kimbo Slice. Mitrione, a former NFL lineman, played his college football at Purdue in West Lafayette, Ind., just an hour away from Indianapolis. Beltran is also 2-0 in the UFC following an upset of Rolles Gracie at UFC 109 and a decision win over Tim Hague at UFC 113 in May.

Dolloway, like Mitrione, is a TUF alum. He reached the Season 7 finals, but lost to Amir Sadollah. Dolloway, who grew up in Ohio about 200 miles from Indianapolis, is seeking his third straight UFC victory. Doerksen returns to the UFC after a win in the Canadian Fighting Championships that was scheduled prior to his upset win over Tom Lawlor at UFC 113, a bout he took on short notice to replace the injured Tim Credeur.

UFC 119 will be the 12th time Spike has broadcast live preliminary fights as a pay-per-view lead-in. The network is also scheduled to air live prelims from UFC 118 in Boston on Aug. 28, but not UFC 117 in Oakland on Aug. 7.

UFC 119 takes place at Conseco Fieldhouse in Indianapolis on Sept. 25. It is the promotion's first event in Indiana and features a main event heavyweight rematch between former champion Frank Mir and Antonio Rodrigo Nogueira. At UFC 92 in December 2008, Mir handed Nogueira the first knockout loss of his career.

Tickets for UFC 119 go on sale to the general public on Saturday at 10 a.m. Eastern through Ticketmaster, the UFC announced on Monday.