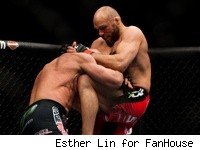 Randy Couture will be on the cover of EA Sports' upcoming MMA video game, and he's the only active UFC star who will appear in the EA game, rather than THQ's UFC Undisputed game. But while Couture's star power is the most important thing he brings to the EA game, he also brought something else: Strategy.

On Tuesday EA released some details about the game's "career mode," which will allow players to get better by training with Couture, Bas Rutten, Pat Miletich, Rickson Gracie and others. And EA's Randy Chase told MMAFighting.com that Couture was particularly involved in providing an element of realism to the way a fighter's career progresses.

"Randy has been to our studio five or six times and has spent a lot of time with our developers and even though he's not really a gamer, he has shared so much about the fights, and about how he trains for specific opponents," Chase said. "One of the things he talked about is that when you're training, if you're training to fight a wrestler, you want wrestlers in your camp. And that's something that we really put into our career mode."

The Xtreme Couture gym is one of the gyms that fighters work out in as part of the EA game's career mode, and it was on the real Couture gym in Las Vegas.

Couture offered EA insight into how fighters actually learn Brazilian jiu jitsu, Muay Thai and wrestling techniques, and how they prepare for specific opponents by bringing in specific sparring partners. In the EA game, players will do the same.

"That's such an important part of the sport," Chase said. "The challenge of our game isn't learning complex controls, it's getting the timing down, and learning how to approach a specific opponent in a way that will allow you to be successful, bring in the right people to prepare you in your camp."

Chase said Couture and the other fighters and trainers featured in the game gave the developers plenty of tips on how to make the career mode resemble the ups and downs of an actual fighter's MMA career.

"We worked really closely with the trainers and the fighters in our game," Chase said. "We want to re-create the sport."