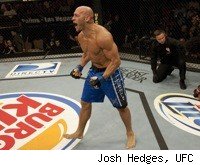 Rafael Natal is the latest competitor to benefit from a victory on the May 21 Moosin card, securing a UFC debut date of Sept. 15 to fight Rich Attonito at UFC Fight Night 22 in Austin, Texas.

Natal (12-2) follows the lead of Roxanne Modafferi and Forrest Petz, who advanced on the Tim Sylvia vs. Mariusz Pudzianowski pay-per-view card to earn themselves a Strikeforce title shot and a UFC return, respectively.

After picking up the biggest win of his career in May with a first-round knockout over The Ultimate Fighter 4 winner Travis Lutter, Natal now turns his attention to another TUF contestant, Attonito. The UFC on Tuesday confirmed the middleweight fight.

Attonito (8-3) stopped Jamie Yager in the second round last month to fight at least another day in the UFC (Yager was released following the loss). Attonito comes from a Division 1 wrestling background and trains out of the American Top Team in Coconut Creek, Fla.

Natal, who inked a four-fight deal with the UFC, is a Brazilian jiu-jitsu black belt and teaches out of the Renzo Gracie academy in New York.