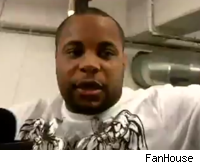 "King" Muhammed Lawal and Daniel Cormier are two of the best wrestlers in MMA, and they just so happen to be two of the biggest pro wrestling fans in the sport, as well.

So when MMA Fighting was conducting interviews in a ring prior to Strikeforce: Fedor vs. Rogers last November, Lawal and Cormier decided they would put their own spin on the famous ending to the Hulk Hogan vs. Ultimate Warrior finish at WrestleMania VI. Because, well, why not?

Enjoy the video below.