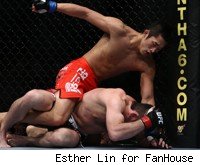 The battle of unbeaten welterweight prospects expected for UFC 120 has been scratched.

Rising star John Hathaway, who had been scheduled to face Korean standout Dong Hyun Kim, will now oppose American veteran Mike Pyle, after Kim was knocked out of the bout due to an injury.

MMA Fighting has learned that Kim recently suffered an elbow injury during training that required surgery, forcing him out of the anticipated welterweight clash. No timetable was given for his return.

The Hathaway vs. Kim contest was seen by some as potentially the most significant fight on the card, as either man has yet to lose a fight in his pro career, with Hathaway 14-0 overall and 5-0 in the UFC, and Kim 13-0-1 overall with four wins and a no contest in the octagon.

UFC President Dana White had confirmed that bout to MMA Fighting about two weeks ago.

Pyle, meanwhile, is a rugged veteran with a 20-7-1 record, and is 2-2 in his UFC run so far. In his most recent bout, he earned a third-round technical submission win over Jesse Lennox via triangle choke.

Known for his ground game and nicknamed "Quicksand," Pyle has 17 of his 20 wins by way of submission.