Frank Mir: Soon to Be the Distinguished Gentleman From Las Vegas? 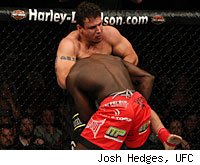 It's been a few months since the last time we heard Frank Mir talking about a career in politics, but judging by a story in the Las Vegas Review-Journal on Tuesday, his enthusiasm for the idea hasn't waned since then.

Mir, who described his political bent as "extremely liberal" when he mentioned a potential run for office to MMA Fighting's Mike Chiappetta back in March, said he's still considering a career in politics once his fighting days are over, if only because he wants to get off the sidelines and into the game.

"Politics affects everybody's daily life," Mir said. "I never want to be one of those guys that bellyaches in a bar about the president or Congress and at the end of the day you never vote or talk about what's going on or do anything as far as having any kind of influence."

Mir seems to have been prompted to think more about his future after meeting Las Vegas welfare rights advocate Ruby Duncan when he attended a speech by President Obama at UNLV recently. As Mir put it after the meeting, "I know as athletes we are looked up to and I get all that, but somebody that devotes her life to the betterment of mankind is somebody who is to be truly admired."

It's one thing to talk about a future political run in some indistinct version of the future, but it's another thing altogether to actually go through with it. Matt Lindland and Chael Sonnen both gave it a shot from the Republican side of the aisle in Oregon. Lindland was unsuccessful and Sonnen withdrew after winning the primary (where he ran unopposed), but then again they also tried it while they were still active fighters.

A retired Mir might have more time to focus on a serious political bid, but he's also been known to be more than a little gaffe-prone, even by the relatively relaxed standards applied to MMA fighters.

This is the same guy who got in hot water with the UFC for suggesting that he'd like to see Brock Lesnar die in the cage (though he later clarified that he didn't mean it literally), and he's also someone who said in a Fight Magazine interview that he doesn't "go anywhere without a gun and a knife."

Who knows, maybe that's just the kind of political figure Las Vegas has been waiting for – a 260-pound Democrat who's armed to the teeth.

Personally, I'd love to see him give it a shot, if only because it would make for some very interesting debates.