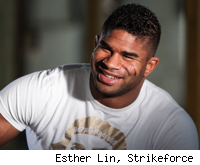 Alistair Overeem still doesn't know whether his next fight will be for K-1 or Strikeforce, but he does have a wish list of fights that he would like to see happen sooner rather than later.

Overeem, the Strikeforce heavyweight champion, stopped by The MMA Hour on Monday, and made it clear that if things went the way he wanted them to, Fabricio Werdum would be his next opponent.

"Let's just say this, there's a couple of fights that I would like to have, and I'm going to start with the first one: the first one is going to definitely be Werdum -- he's the winner of that fight [against Fedor Emelianenko]. I'm sure, 100% sure, I'm going to beat him," Overeem said.

Overeem wants Werdum next not only because he recently defeated Emelianenko, but because "The Demolition Man" lost to "Vai Cavalo" in the first round of the 2006 Pride Open Weight Grand Prix.

"It's payback time, baby. Payback time, and it's going to be sweet," a confident Overeem said.

The Dutch fighter went on to explain that he would like to fight Emelianenko after Werdum and then finish up the K-1 Finals.

"Second fight is the Fedor fight. He lost his last fight. Did he get caught? I don't know. Has he lost it? I don't know. But he's still one of the guys I would love to fight. I've been challenging him for a year, I was hoping that I was going to be the one to beat him, but now he's lost to Werdum. But still, I've been challenging him for a year, so I still want to fight him.

"And then the third choice would be the K-1 Finals, the last fight."

Here's where things get tricky: Overeem added that the next big Strikeforce show is expected to take place in October, which is around the same time as the start of the K-1 Grand Prix Final 16. So it's unlikely that he will be able to compete for both Strikeforce and K-1 in the same month.

"I have qualified for the final 16. I'm not entirely sure if I'm going to compete, but I would like to compete. K-1 is striking, I like it, it has a little bit different audience. It's very popular in Holland. So yeah, I want to become champion. I see myself as champion."

Oh, and while Overeem says he wants Werdum next, Werdum himself has already stated that elbow surgery will most likely put him out of action until next year.

That leaves Emelianenko, the fight everyone has wanted to see since "The Last Emperor" signed with Strikeforce last summer. However, the issue with that scenario is that Strikeforce might be reluctant to book Emelianenko in a title with only one fight left on his contract.

So many questions, so little answers. Such is the life of the Strikeforce heavyweight champion.