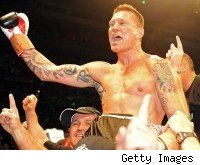 After opening the door to James Toney, the UFC better get used to other boxers trying to wedge their way into the octagon.

The newest name on the list? Australian boxer and IBO cruiserweight champ Danny Green, who claims he wants to face Brock Lesnar next February, when the UFC likely returns to his home country. The cruiserweight division, for those of you who don't follow boxing, goes up to 200 pounds. According to BoxRec.com, Green weighed in at 184.75 for his last fight, meaning he'd give up around 80 pounds in the hypothetical matchup against the UFC heavyweight champion that will never, ever, in a million years happen.

Of course, there's a huge caveat to Green's interest anyway: He wants to fight under amended rules.

"It would have to be a stand-up fight," Green told The Daily Telegraph, Sydney's largest newspaper. "There's no way I could compete with Lesnar on the ground."

He may want to reconsider that statement. While no one would suggest Lesnar could hang with Green in a straight-up boxing match, even a "stand-up" match, as Green suggested, would put him at a serious disadvantage. Does he think he'd be able to keep Lesnar -- a former collegiate wrestling champ -- from bull-rushing him into the cage and savaging him with elbows to the head and knees to the body? What about throwing kicks into the equation?

Still, Green, who most famously defeated boxing legend Roy Jones Jr. via first-round KO last Dec., claims he's spoken with his management team about getting in touch with UFC president Dana White to set up the match. They should save their time. No athletic commission would sanction such a fight, and the UFC would have no interest in it anyway, since White himself has characterized the upcoming Toney-Randy Couture fight as a one-time "freak show," even though it will be contested under unified MMA rules.

For what it's worth, The Ring magazine ranks Green as the No. 7 cruiserweight in the world. Most likely, the statement is something of a publicity stunt, as Green is scheduled to defend his boxing title against Paul Briggs tonight in Sydney.

Meanwhile, Lesnar's next octagon date was recently locked up. He'll face Cain Velasquez at UFC 121 in October, and should he win, he'll have the Junior Dos Santos-Roy Nelson winner waiting in the wings.