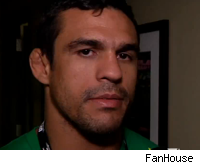 It's been more than a year since UFC President Dana White first identified Vitor Belfort as the man who could dethrone middleweight champion Anderson Silva. That was in June of 2009, when Belfort was preparing to fight on an Affliction card that never happened, and Silva was preparing to fight Forrest Griffin after sleepwalking through a win over Thales Leites.

Now Silva is preparing to fight Chael Sonnen after sleepwalking through a win over Demian Maia, and Belfort is recovering from a shoulder injury that prevented him from fighting Silva and allowed both Maia and Sonnen to leapfrog him in the UFC's middleweight hierarchy. But Belfort is back to training after shoulder surgery, and in his training camp, the focus is on fighting Silva.

Belfort's trainer, Shawn Tompkins, is dismissive of Sonnen's chances and says he's looking forward to the opportunity to corner Belfort against Silva. "Nothing against Chael, but I think he talks better than he fights," Tompkins told the Las Vegas Sun. "I'll be front row studying both of them because that's my job. I think Chael will talk himself into the fight but, ultimately, Anderson will knock him out."

That pretty much gets it right: Sonnen has done a masterful job of portraying himself as the chief rival to Silva outside the Octagon, but inside the Octagon there's a huge talent gap between the two of them, and it only makes sense for Belfort to be thinking about fighting Silva, not Sonnen.

Tompkins notes that Belfort wants to fight the best opponents he can get, and there's certainly no doubt about that: Not only is Belfort aiming to take on the UFC's best fighter in Silva, but just before Affliction collapsed, Belfort was lobbying for a chance at that promoter's top fighter, Fedor Emelianenko.

"Anderson is the man and we want to beat that man," Tompkins said. "I think that fight would mean a little more to us. And honestly, go ask the fans who they want to see fight. It's Anderson and Vitor."