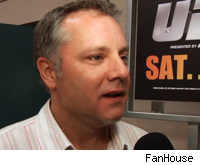 It's already been a busy year for Marshall Zelaznik, the UFC U.K. President and Managing Director of International Development, and the fall isn't looking any easier. In October the UFC returns to England for the first time in nearly a year with UFC 120, and then later this year the UFC will once again turn its focus toward Germany.

MMA Fighting recently spoke with Zelaznik about the pressures of international expansion, the UFC's future plans for Asia, Afghanistan, and the rest of the world, and how he deals with the sometimes maddeningly misinformed resistance in new countries.

Ben Fowlkes: With UFC 120 in October, the UFC is finally headed back to the U.K. for the first time since November of 2009. What's the reaction from fans been like after such a long hiatus?


Share
Marshall Zelaznik: It has been way too long, but we're happy to be back in London. Obviously, we haven't announced anything yet, but the announcement is imminent. I can tell just from my social interaction with fans and the other people in the company, everyone is dying for the next event in the U.K.

The U.K. market seemed like a big deal to the UFC when it first began expanding internationally, but so far in 2010 you've been to places like Australia and Abu Dhabi, but no U.K. shows. Do you worry that the U.K. fans will feel like they've been ignored as the UFC focuses on the rest of the world?

I think that if anyone has that impression, when you look objectively at how we haven't been here in over a year, you can understand how someone might feel that way. But no one is ignoring the U.K. It's just an effect of trying to be everywhere at one time. And just the way schedules work out, we probably would have been back in the U.K. earlier, but the TV dates we commit to and how we start working out our calendars, with the lack of availability of venues in the U.K., it just worked out this way.

We would have liked to have been in the U.K. before the summer, but it just didn't work out with the schedules and the availability. But the offices here in the U.K., there are ten of us who live and breathe the U.K. and we're always focused on it, so if people hear that they should know that no one is thinking of them as second-class citizens.

Does it get frustrating for you to hear that fans in England or Ireland might be feeling that way as you're trying to take the UFC into new countries?

I don't know if frustration is the right word. It's a challenge as you grow, and I guess it's a good problem to have in some ways. We, as a company, try to do everything possible to make our fans feel appreciated, so if we disappoint them by not coming back soon enough, I guess in some regard that's frustrating for us. But everyone should understand that when we plan out a year's worth of events, all the areas you just mentioned are on that list. We try to identify when we can be there and when the venue availability will allow us to come back when we need it.

What do you look at to help you decide which country to go into next? Is it TV ratings, merchandise sales, what?

I think it's two things, primarily. It's TV ratings, and a combination of the partner we have in that area. So if we have a strong TV partner – for instance when we went to Germany, we weren't on TV very long there when we relaunched – but we were getting really strong TV ratings.

And then we watch our web traffic. We get hundreds of thousands of people coming in from all parts of the world, and we can identify where things are starting to pick up. So those are the initial factors, and then we dig a little deeper. Are concerts rolling through that city? If they are, what do their ticket prices look like? But it all starts and is driven primarily through TV and internet traffic.

Do you think you need a fighter from that nation in order to be successful in a new country?

It sure makes things easier, but we don't necessarily need it. The thing that helps with a local fighter is it gives meaning to the local media beyond just the business story that the UFC is in town, which is a story in and of itself. But if we've been on TV for a number of years in an area and we're getting good ratings, those fans want to see the fighters they've seen on TV. It's not paramount that we have a local fighter. I used to answer that question a lot with regards to [Michael] Bisping, and he's very important to us in the U.K. But when you hear fans roar for Rich Franklin or Forrest Griffin or "Rampage" [Jackson], it was clear that those guys were every bit as big as the local hero.

How many events would you like to see per year in the U.K.?

I think this market could take four to six events a year. The realities of the business make that difficult, but we're starting to put together a business model that would allow us to bring more events to the U.K. and parts of Europe. I think there's certainly an appetite for it. ...If we had our way, we'd have an event a weekend. I think we could eventually be at that place where there are two events on a weekend.

Do you not worry about diluting the product at that point?

I think that as we evaluate every step, that's something that has to be considered. But I don't think that's something we need to be too concerned with right now because there's a lot of talent out there. The UFC, with Joe Silva and the way he finds talent, I think that when the day comes that we are lacking a main event and a solid undercard, that's the day an event won't take place because we don't want to put on a B product. We aren't there yet, but it would be crazy of us not to evaluate that as we do more events.

Dana White has mentioned several times that he'd like to do an event in Afghanistan for the troops. What's the status of that?

I know it's still on the chalkboard that we see back home. It's just, again, a timing thing. There's a lot of nuances to the logistics of pulling off an event there. I know it's still on one of the burners, but I don't think it's imminent. It certainly won't be this year. Dana wants to go. The military groups we've been working with would really like to have us, so I think it's going to happen. I just don't have a definitive timetable.

How about the Asian markets? Japan has historically been a tough place for foreign promoters to get into, but is the UFC still working on eventually having an event there or somewhere else in Asia?

The Asian markets are a priority of ours. Certainly continental Europe remains in our crosshairs, and to the extent that we'll have a new territory next year, my sense is it will be in continental Europe. Asia is hot on our list. I'm probably dealing with three different potential locations for an Asian event, whether it's Japan, whether it's somewhere in China or Hong Kong – even Singapore comes up on the list. But in terms of when it will happen, I don't have a good sense, though next year it wouldn't surprise me if we were able to pull one of those off.

I don't know if you've seen it, but FEG recently partnered with a Shanghai-based investment bank and then announced that they were declaring war on the UFC and the WWE. How seriously do you take them as competitors in the Asian market?

We'd be foolish not to keep abreast of our competition elsewhere, but whenever we talk to any media – whether it's online, TV, or print – it's clear that they look to the UFC as the standard-bearer of the industry. I think it's our market and we'll do our best to continue to ensure that it's our market, doing what we think makes business sense.

When you go into new countries, sometimes you face some push-back from politicians or the media, as you did in Germany initially. A lot of it seemed to be based on misinformation or faulty assumptions. I imagine that has to get frustrating for a man in your job.

The thing with Germany was, while we anticipated there might be some discussion about it, it never came up until a week or two before the event. We had done press conferences and media appearances to try and get them educated on it, and then it kind of came out of nowhere. For me, my experience having been with In Demand back in the day when there was controversy with the UFC, I didn't have any idea what Dana and Lorenzo [Fertitta] and the previous owners of the UFC were going through. But Germany really opened my eyes that there could potentially be an issue with some of these markets that we thought we had acted appropriately to diffuse those situations.

But having cut my teeth on that one, I guess nothing's going to surprise me anymore. I remember talking with Dana and Lorenzo about it and they were telling me, 'Look, these things are going to happen. Don't get yourself too worked up about it if we did everything we could.'

So how do you deal with that reaction in new places? Do you just tell yourself that if you keep persisting, it will all take care of itself?

It's definitely a matter of being persistent. If you're dealing with a media situation, you'll usually find that people are willing to open their minds to it eventually. You may never convert some people, but in the political realm, because there's usually a cycle of people rolling through, it's usually just a matter of patience. Attitudes will change, people will change. We're not going anywhere, and if someone is opposed to the UFC, there's a pretty good chance that they may be replaced over time.

That's a nice way of putting it. Dana White often takes an approach that's a little more like a conqueror kicking in the door in new places. You seem more diplomatic in your answers.

[Laughs] That's probably from having been a lawyer for eleven years. I think the nice thing is, the heart and soul of this company is Dana. When Dana feels strongly about something, you know about it. You never feel any ambiguity about what we feel as a company.

So when I have to go out and take a position on something, I know deep down what our position is on it. I try to find a way to be a little more subtle about it, because there's a need from time to time to figure out what the lay of the land is. For instance, I know we're going to be doing an event in Germany, but there's a lot of moving parts to Germany. We have to acknowledge that, but our underlying belief is that we're going to have a successful business there.