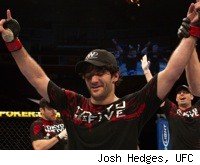 The MMA Hour returned (finally!) Monday with another live broadcast.

On this week's show, we were joined in studio by UFC welterweight Charlie Brenneman and MMA Fighting's own Mike Chiappetta. Brenneman is getting set to face undefeated Johny Hendricks at UFC 117.

Later in the show, we talked to Tim Kennedy and Strikeforce heavyweight champion Alistair Overeem, who discussed why he didn't fight at DREAM.15 and what the future holds for him.

Enjoy the show below.