Somdet, Tsuchiya, Okazaki Retain Titles at The Way of Shooto 4 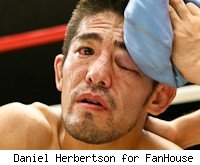 While Tsuchiya and Okazaki were able put on solid but not dominating performances to secure decisions and defend their belts, Rambaa "M-1" Somdet was actually losing the first round of his bout with Hiroyuki Abe until the challenger caught a shot in the eye which caused it to swell completely shut, ending the bout.

Full results and a breakdown of the fights below.

Defending champion Rambaa Somdet was unable to stop the trips and shots of Hiroyuki Abe in their bout, and through the first round found himself being taken down repeatedly although, he was able to stand to land the occasional strike during Abe's attempts to advance position or submit.

After the champion fended off an armbar from mount and made it back into Abe's guard, Somdet landed a punch that didn't seem to faze the challenger but it did unfortunately cause his eye to swell completely shut. With Abe unable to see at all out of one of his eyes, doctors were left with no choice but to stop the bout, much to Abe's dismay. If the round were to end at that point, Abe would have most definitely been ahead on the cards.

2008 Shooto Rookie Tournament MVP Issei Tamura was handed his first loss by defending Pacific Rim 143-pound champion Taiki Tsuchiya and until this bout, Tamura's wrestling based game had looked unbeatable as all of his opponents had found themselves stuck on their backs, unable to mount any offense against the Krazy Bee product. For his shot at Tsuchiya's title though, Tamura forgot his background and instead opted to trade with the striker and predictably came up short.

Through three rounds, Tsuchiya hopped up and down Kazuo Misaki style to throw Tamura's rhythm off and to disguise his cutting low kicks. Although Tamura was able to land the odd powerful one-two combination to win the odd point with the judges, he wasn't able to consistently find the target but Tsuchiya had no problem doing so with his low kicks. Tamura offered no defense to the kicks and in the final round the champion did not even attempt to hide the fact that he was attacking the legs. As Tamura got slower, the kicks came in more frequently and so Tsuchiya was able to take the majority decision to retain his title.

Although Taiki Tsuchiya walked away with his title, Issei Tamura had more than enough skill to capture the belt and was looking like one of the strongest young prospects in Shooto but his lack of takedown attempts and then lack of ability to change his (horrible) game plan cost him this fight.

In the first two rounds, the champion found himself defending aggressive leg locks from all directions from the "Skin-Colored" grappler and came close to being submitted at one point with a calf-slicer although the attempt didn't earn a "catch" from the referee.

Suzuki swung with a hook so wildly to open the third round that he spun 180-degrees and ended up giving his back to the champion. For the entire last round, Okazaki was firmly glued to Suzuki's back with a body triangle and although he was unable to finish any of his choke attempts, easily won the judges favor.

Suzuki's leg lock efforts in the first two rounds did not sway any of the judges and Okazaki retained his belt with a unanimous decision.

Kenichiro Togashi's superior boxing opened up a large cut on the bridge of the nose Jani Lax that bled badly before the doctor had finally seen enough in the third round after multiple checks. Lax was bleeding heavily and blood covered his face and ran though his mouth but would have been able to continue had doctors not seen the bone through the gaping wound. The cut came early in the first round and following that a simple strategy of "jab the cut" proved effective although Togashi actually caught some shots in the nose himself which also prompted a doctor check for the bleeding.

Tenkei "Fujimiya" Oda continued his return to form after barely surviving a barrage of heavy strikes from the Finnish Matteus Lahdesmaki. Oda was badly shaken in the first round from knees and punches but rallied to get a knockdown and then mount where he rained in punches to get the thrilling first round TKO.

Mach Dojo product Kunio Nakajima managed to get a takedown early against Daisuke Hoshino and was able to land some solid punches from half guard. But then, from the bottom, Hoshino rocked the jaw of Nakajima with a punch and put him out cold while on top. Hoshino rolled his unconscious foe off himself, landed up some especially brutal but unneeded punches and secured the highly unusual TKO victory.