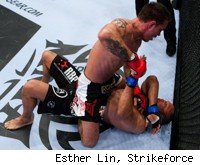 After a relatively short courting period that was really more formality than anything else, Jake Shields officially signed with the UFC on Monday.

Shields (25-4-1) was looking for a new promotion to call home after he couldn't reach an agreement with Strikeforce. Over the past few months, all the speculation focused on not whether he would wind up in the UFC, but when.

In April, at the WEC 48 pay-per-view, Shields was shown on camera sitting next to UFC president Dana White, who mouthed the words, "He's mine." Shields was also a coach for Chuck Liddell on Season 11 of "The Ultimate Fighter," which filmed earlier this year.

MMA Fighting reported last week that despite reports Shields had put ink to paper, the deal wasn't signed just yet. Today, on his official Twitter account, Shields told the world he had signed a contract and confirmed, as MMA Fighting first reported last week, his first opponent will be Martin Kampmann at UFC 121 in Los Angeles on Oct. 30.

"UFC contract officially signed," Shields said via Twitter. "Fighting Kampmann in CA in a few months. Thanks to @danawhite and everyone for their support."


Share
Shields, who hasn't lost since December 2004, was Strikeforce's middleweight champion. He will return to his natural home at welterweight in the UFC and most believe he will quickly become a contender for the title held by Georges St-Pierre.

Shields reiterated his appreciation for the opportunity in the UFC to MMA Fighting on Monday night.

"I'm excited that everything is finalized and I'm going to get to continue to test myself against the best," Shields said via text message through his public relations agent. "Fighting in the UFC has been a lifelong dream. Big thanks to Dana, my team and all my family and friends for all the support."

Shields joined Strikeforce after the collapse of EliteXC, where he was 4-0 and the welterweight champion. He went 3-0 in Strikeforce with wins over Robbie Lawler, Jason "Mayhem" Miller and Dan Henderson. Though his wins over Miller and Henderson were decisions, his previous eight victories were stoppages – including six submissions. Shields holds a black belt in Brazilian jiu-jitsu from Cesar Gracie.

After his win over Henderson in Nashville on a nationally televised CBS card in April, Shields and his teammates were involved in an in-cage brawl after Miller jumped into Shields' interview to ask for a rematch. Shields was apologetic after the scene was cleared, but he, and the others, received three-month suspensions from the Tennessee commission.

Aside from his wins over Lawler, Miller and Henderson, which in succession are perhaps the three biggest of his career, Shields has notable wins over Yushin Okami, Paul Daley, Carlos Condit and Nick Thompson.